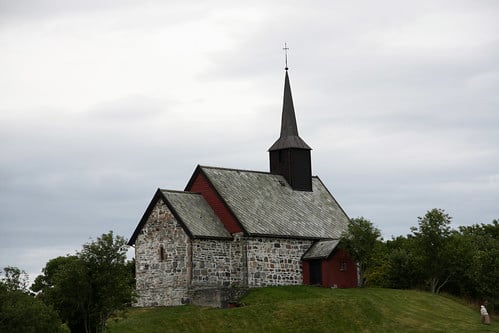 Edøy Old Church. Photo: kjelljoran/Creative Commons
The new ship burial, found less than 150m from the first, appears to contain a 1000-year-old eight-oared vessel (in Norwegian an Åttring, or perhaps a 'færing', which is similarly long but has just two oars).
Bjørn Ringstad, county conservator in Møre og Romsdal, said that the new find underlined how important the island had been in Viking times.
“This helps strengthen our impression of Edøya as a power centre in the Iron Age,” he said.
READ ALSO: 1000-year-old ship found underneath ground on Norwegian island Georadar images showing the boat. Photo: More and Romsdal county council
Burying people alongside ships, he explained, was part of an aristocratic funeral tradition reserved only for the richest members of society. “They took a ship or a boat with them into their tomb,” he said.
As well as the two ship burials, the georadar survey has revealed two houses and five burial mounds.
Elin Kanck Lorentzen, who led the georadar studies as part the “One Piece of History” project for Møre and Romsdal county council, said that she had applied for funding for further research.
“The georadar has helped us reveal new secrets about Møre's role in the Viking Age. Now it is up to us to find good models for how we can create value ​​based on our shared history,” she said.