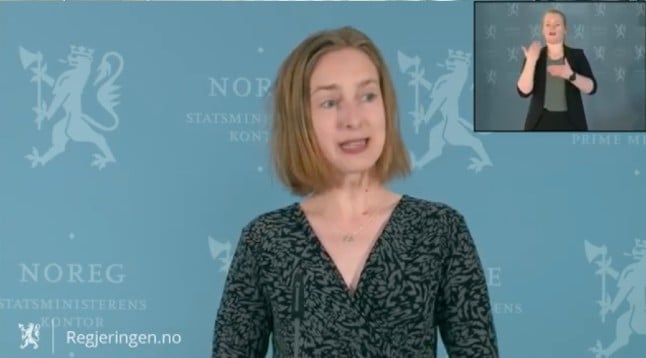 Business Minister Iselin Nybø said at the government's daily press conference on Thursday. Photo: Screengrab
“This is very important for business and industry. Our workforce flows across national borders,” Norway's business minister Iselin Nybø said at the government's daily press conference on Thursday. “This is a step towards a
more normal everyday life.”
To curb the spread of the new coronavirus, Norwegians returning from abroad and foreigners that are allowed to cross the closed border are subject to a 10-day mandatory quarantine period.
But starting Monday, those travelling for work to and from the Nordic countries, including citizens of other countries, will be exempt from the requirement.
She added that the government was also considering ending the recommendation that people work from from home, with an announcement expected next month on the reopening of corporate offices in Oslo and Bergen
“We have set up working groups to look at how people can physically meet more at work. This report is due June 15,” she said.
The quarantine requirement for those taking business trips abroad has long been a source of complaint from Norwegian companies, Nina Melsom, Director of Labor at the Confederation of Norwegian Industry, told NRK.
“Many of our companies have had issues about not being able to sit in travel quarantine when they come to Norway,” she said. “In our latest survey, 6 out of 10 companies said that they experienced some or a great deal of restrictions on labour movement.”
The country also announced that it would relax quarantine rules for those that had been in direct contact with confirmed cases.
Not all of those who had been in contact with a confirmed case will have to be quarantined, but will instead only need to be tested twice — three and seven days after the contact.
Starting next week, Norwegian children up to the age of 19 will also be able to take part in organised sports.
While competitions and matches between different clubs are still off the table, young athletes will be able to have “normal physical contact with each other during practice.”
“We know how important sports are as a community builder, as a social arena and a meeting place,” culture minister Abid Raja said in a statement. “That is why it is extremely important… that we now start exercise activities for children and young people.”