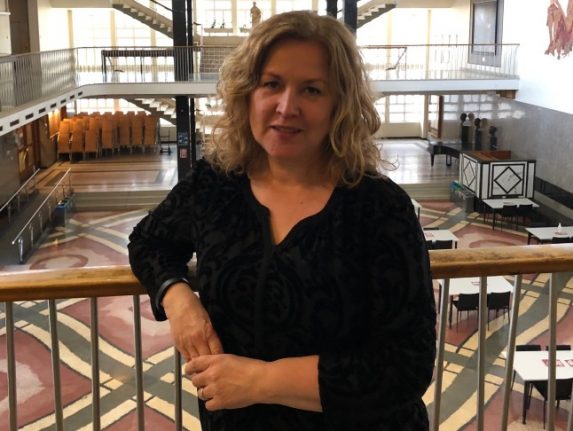 Tone Fairway, the deputy head of Oslo Commerce School. Photo: Private
When did the pupils return?
We have had them in the building since Monday, but we can't have them all here at the same time because we don't have enough room.
Our classrooms are fairly small, so we have to split each class between two rooms so we can obey the one-metre rule. We had third years in on Monday, the first years in on Tuesday and the second years today.
We also have some vulnerable students, who are here more often than the regular classes.
How many students can you fit in each classroom?
About 15 in each room, and then when the students aren't in school, they are being taught by teachers using Microsoft Teams online.
Have all pupils returned?
No. We have some students who are in the risk groups and we let them stay at home and have classes over the internet, and it's the same with some teachers.  We have some teachers who shouldn't be in the school building, so they teach online using Teams.
How do you combine online and classroom tuition?
If we have the second years in, then the second years will be in and they will all be taught at school. If you put them in two classrooms, then the teacher might move between the two classrooms.
Some schools have had online and classroom teaching at the same time — so the teacher is in the room with half the class at the same time as streaming the lesson to the other half of the class back at home.
We think what's important when we have the kids back at school is that they have good one-to-one guidance, and that they get closer attention that you could have via Teams or over the internet.
Some schools have gone away from the regular time table and have organised classes completely differently, but that means a lot of work for the schools and its quite challenging for teachers.
What measures have you taken to avoid spreading the infection?
We are following all the guidelines, so that if students and teachers can avoid public transport, they do so. What we are seeing is that more students are being driven in by their parents, and that they are also cycling or walking to school.
Have you staggered the times when students arrive and leave school to avoid rush times?
No. We haven't had to stagger arrivals as our regular timetable is already like that. Some pupils arrive at 8.30am, some arrive at 10am.
How has it gone so far?
It's not been a problem so far, but we're on day three, so it's still early days.
The challenge is that when you have young people who see each other after a long while, it's very difficult to maintain social distance in the breaks or in lunch hours. We can tell them to stay apart and arrange seating areas, but it's hard to enforce.
We try to mingle with them in the break periods, and we talk to and appeal to the parents and appeal to the students orally when we see them and via emails and messages to the parents. It's important that the parents also talk to the pupils at home, because when they meet up, it's easily forgotten. You're back in school and you're back in your old mode.
What has been the impact of the nearly two months of distance learning?
Some students have benefitted from being able to be at home, sleeping a bit longer in the morning and having the calmness and peace to do their work — students who are perhaps easily distracted and who are shy perhaps. Some of them have blossomed.
I also see that some of the students who are perhaps not so academically inclined and keen to do schoolwork when they're here, they have missed school and so they've been in touch with us more than you might have expected.
Then you have had those who were balancing on a tightrope before the schools shut, who have lost their interest or ability to follow their courses. There are a lot of challenges. If you have challenges in your family, or if your'e home with little siblings in a small flat, it might be difficult to work in a concentrated way.
We see a mixture of effects and we are in the process of analysing who has benefitted and who has not.
A lot of teachers say that they now know their students better, but we all missed having them in class.