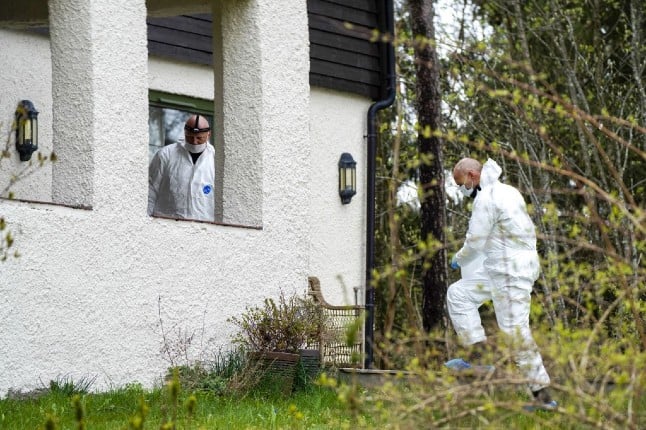 Police technicians search Tom Hagen's house in Lorenskog, outside Oslo. Photo: Heiko Junge / NTB Scanpix / AFP
The Eidsivating Court of Appeal in Hamar ruled that police had failed to establish that there was reasonable cause to suspect Hagen of the crime.
However, as the ruling has been appealed by Norway's police, Hagen will remain in custody until the case is reviewed by the country's Supreme court.
Hagen's lawyer Svein Holden said he was “not surprised” by the verdict when he met reporters outside Oslo District Court.
“When I saw it [the police's evidence], it was terribly weak,” he said.  “I don't think the police fulfilled their duty under the Criminal Procedure Act when they arrested him the way they did,” he continued. “And it's obvious that being thrown into a bare cell and stripped of your belt and stuck sitting there for a 70 year old man, it's been a tough week for Tom Hagen.”
According to Holden, even before the ruling, Hagen had been more worried about police time being wasted than about being convicted.
“I'm innocent, so the police won't find any evidence against me,” he said, Holden reported. “But what happens when they find out I'm innocent? Does that mean that the police have spent so much time on me, that they will be unable to solve the case and find Anne-Elisabeth?”
READ ALSO: