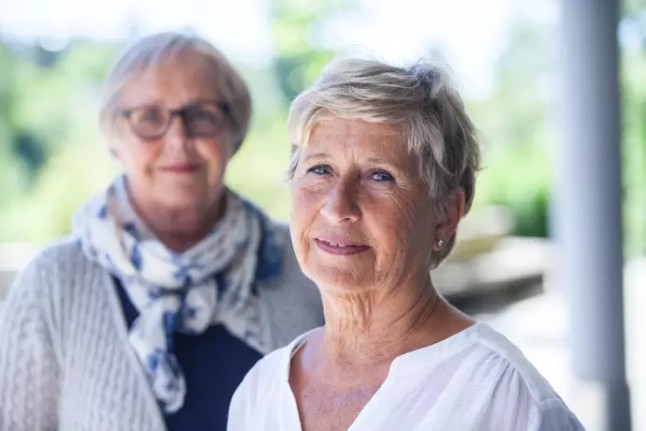 Now would be a good time for grandparents to meet their grandchildren. Photo: Johnny Syversen/Pensjonistforbundet
Frode Forland, a director at the Norwegian Institute of Public Health (FHI) said at the Norwegian government's daily press conference, that the institute no longer believed that children were very infectious.
“We know that children are less frequently infected and usually get milder symptoms,” he said, according to NRK. “It is primarily people with symptoms that infect others. Against this background, we believe it is relevant to say that children and grandparents can meet if they maintain good infection prevention advice.”
He said that grandparents could risk meeting their children inside if they themselves are fit and healthy, but that if they had health difficulties, they might be better off meeting them outdoors.
Forland's briefing followed an interview with FHI consultant Are Berg, who told the VG newspaper that grandparents who have been unable to meet their grandchildren for a long time, should take advantage of the very low current rates of infection in Norway.
“The change is not dramatic, but if it's been a long time since grandparents have seen their grandchildren, now might be a good time for it,” he said. “There is good spring weather in parts of the country, and less spread of infection.”
He said that the overall advice for elderly people to avoid meeting too many people and not to spend too much time with their grandchildren still stood, however.
“Since it is difficult for many to not be with their grandchildren, we want to be able to adapt the advice and guidelines as much as possible,” he explained.
Berg said that if grandparents in Norway do meet their grandchildren, they should be careful to avoid too much close physical contact.
“Try not to have the direct, physical contact like sitting on your lap – but if that happens it's not a crime. If children come running and thros their arms around their grandmother's neck, it might feel violent to physically take the child away. Then it might be better to just think “OK, OK, let it happen.”
READ ALSO:
Berg said that as more is becoming known about coronavirus, evidence is growing that as well as being much less likely to become ill as a result of coronavirus, children were also much less likely to spread the infection.
He said the advice about grandchildren was initially intended to prevent grandchildren babysitting when schools were closed.