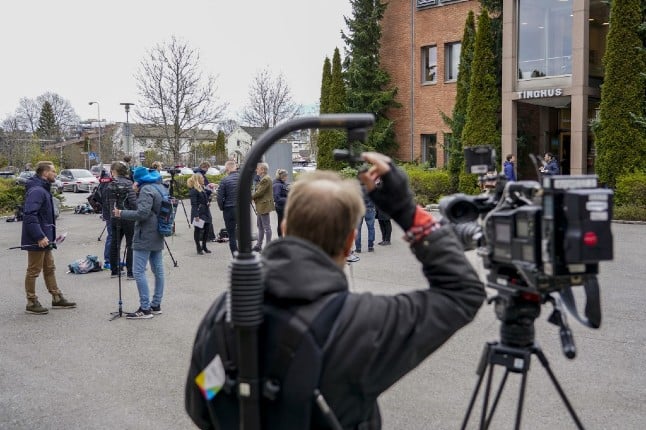 Journalists gathered outside the courtroom in Lillestrøm for the hearing. Photo: Heiko June/NTB/AFP
In a statement following a custody hearing on Wednesday, the court ruled that the 70-year old energy entrepreneur could be kept behind bars for four weeks while police analyse evidence seized at his home and office.
“In the court's view, the accused has a real opportunity to destroy or tamper with evidence, for example by removing or destroying evidence in places the police have not yet investigated, or plan investigate again, or to coordinate his story with others involved,” the court said in a statement.
The Lower Romerike court, based in Lillestrøm outside Oslo, backed the police's view that there are likely to have been more people involved in the murder.
“The court also finds it likely that there have been several people involved in the case. The court notes that Anne-Elisabeth Falkevik Hagen was removed from the property.”
Hagen was arrested on Tuesday morning after Norwegian police became convinced that the apparent kidnap of his wife from his house outside Oslo on October 31 2018, the ransom note left behind at his house and the ensuing negotiations with kidnappers had been faked.
In a press conference police then said he had been arrested on suspicion of murder or complicity in a murder.
After the ruling, Hagen's lawyer Svein Holden repeated his argument that the case against his client was “flimsy”.
“I stand by my opinion that this is a particularly thin basis for an arrest,” he said outside the courtroom, according to VG and state broadcaster NRK.
“Statistically, people in such cases are not released in the first detention hearing. It almost never happens,” he said. “But if it was ever going to happen, then I think it should have been in this case,” he said.
The court held the hearing behind closed doors, and in an unusual step, Holden was allowed to hear evidence that his client was not, with Hagen asked to leave the room.
According to Farid Ighoubah, a journalist with Nettavisen, who was appointed to argue for the doors to be opened to the press Hagen had appeared tired in the hearing.