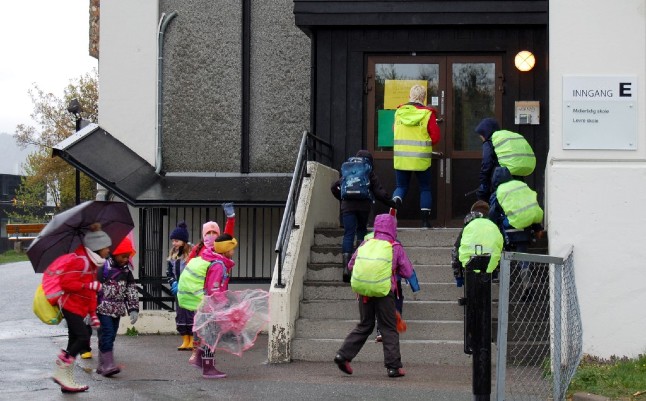 Pupils enter Levre school in Baerum, west of Oslo on Monday. Photo: Pierre-Henry Deshayes/AFP
Guri Melby visited Ellingsrudåsen school in Oslo on Monday morning to oversee the reopening of schools for the 250,000 pupils in their first five years of school.
“We plan to present a plan for further school opening next week,” she told journalists, according to the broadcaster TV2. The plan, she said, would “accommodate all students”.
“We have been clear that we want all students to return before the summer. Those decisions will be made next week,” she said, according to the VG newspaper.
“I realise that many are impatient now, but we have to be  patient now so we have the best possible basis for making a decision next week.”
Steffen Handal, head of Norway's teachers' union, told TV2 that he was worried teachers might end up having to spend additional time cleaning to meet the new guidelines on hygiene.
“I think most teachers understand that they might have to help wipe a desk here and then,” he said. “But if they are left with the majority of the cleaning that is in the guidelines, it will be hard to do good teaching.”
Melby said it was up to the head teachers in each school to decide how to handle the extra cleaning. “Both teachers and pupils must be willing to participate a little.”
She said that Norway's government had been busy hiring additional teachers ahead of the reopening to make sure that schools had sufficient resources to meet the guidelines given out by Norway's health authorities, while municipalities had been given additional funds to help deal with the crisis.
“I think we should wait and see how it goes for a bit before deciding whether to add new resources,” she said. “Remember that the municipalities were given 5bn kroner last week to compensate them for exactly this situation.”