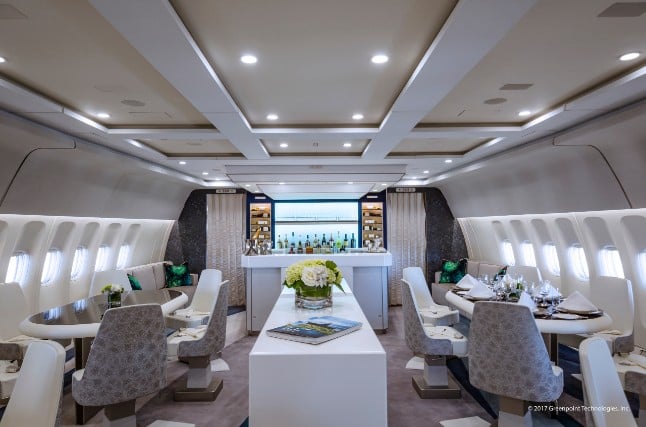 Outgoing oil fund chief Yngve Slyngstad was flown to Philadelphia on the Crystal Skye, a jumbo jet which has been converted into a flying restaurant. Photo: Crystal
The scandal then deepened on Monday after it emerged that he had then asked his predecessor for “a little favour” to help him get the job.
According to an exposé in Norway's VG newspaper, the hedge fund billionaire Nicolai Tangen flew the fund's outgoing chief Yngve Slyngstad and other guests to Philadelphia on the luxury jumbo jet Crystal Skye for a three-night conference, where they were treated to concerts by Sting and the US jazz star Gregory Porter. The singer Sting performed at the event. Photo: Mike Maguire/Flickr
“It was my decision to take this flight,” Slyngstad said in a statement when the story broke on Sunday. “This is the first time I have flown anything other than scheduled flights covered by Norges Bank. Of course, I should have taken the train back to New York and a scheduled flight home.”
Tangen told VG that the “Back To University” seminar at his alma mater, the University of Pennsylvania's Wharton College of Business, had been intended to be his “dream conference”.
“For many years I have had a dream of gathering the most interesting people in the world in the fields of expertise I have engaged in and that occupy me,” he said. “I spent two years of my life putting together the programme.”
“I expected that the trip would eventually become known and that is perfectly fine for me. I am a big believer in openness in everything I do, including this, even though it was a private event.”
But on Monday, it emerged in a list of emails handed out by Norges Bank, that six weeks after the event Tangen had emailed Slyngstad asking for “a little favour”, which might help him in his application to lead the oil fund.
“Can I ask you for a little favour? Your shoes as leader of NBIM will be very difficult to fill, but somebody will have to try, and we touched on this in Philadelphia,” he said. “Do you have 30 minutes to tell me what the job involves in terms of political guidance, opportunities and the like?”
According to the Financial Times, Slyngstad did not reply to the email and did not then meet Tangen until after Norges Bank's board decided to appoint his as his successor.
Norges Bank on Monday announced in a statement that it would repay the cost of Slyngstad's flight and his accommodation in Philadelphia.
Øystein Olsen, the governor of Norges Bank, said he did not regret appointing Tangen, and did not see the revelations as reason for his dismissal, adding that Slyngstad had had no role in appointing his successor.