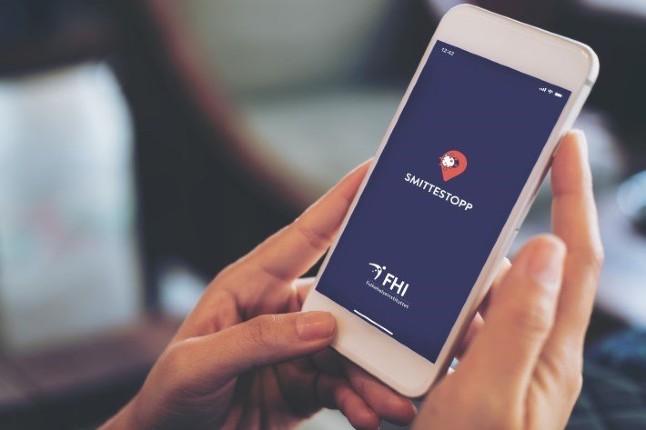 The app is intended to notify infections and share data on how groups move in the community. Photo: Mostphotos / Farknot Architect/Norwegian Institute of Public Health
The Smittestopp (Infection Stop) app, which is available on the Google Play and Apple app stores, has been developed by the software company Simula together with the Norwegian Institute of Public Health.
Norwegian authorities hope that at least half the population downloads it.
READ ALSO: Norway health agency to launch coronavirus tracking app
Prime Minister Erna Solberg said at a press conference launching the app that it represented “a step forward for our greater freedom”, and called on “as many people as possible” to download it. Doing so, she said, would allow the government to lift restrictive measures earlier.
“The app will be so accurate that it can be used to notify us via SMS if we have been in the presence of someone who has recently been confirmed as having the coronavirus,” she said.
Such “more effective infection detection”, she added, was a crucial part of returning life in Norway to something closer to normal.
“In order to get society back up and running, there are several preconditions that must be met: that we get more effective infection detection system, and a system for faster and more effective isolation of the infection.”
Solberg promised that any data collected would not be used to police adherence to quarantine for those with confirmed infections.
Gun Peggy Knudsen, acting assistant director at the Norwegian Institute of Public Health, echoed the call to download the app.
“Data on how we move and how many people we infect will be important to see how infection control measures work, and how many more close contacts we get,” she said in a press release. “As data is collected, you will receive a notification if you have been in close contact with an infected person and will be advised on how to deal with it.”
Knudsen said the app would begin by simply collecting information, with the text message function only trialled after a week in certain municipalities, including Drammen, 40km outside Oslo.
“Smittestopp users in these municipalities will receive an SMS notification if they have been near an infected person,” she said. “In this phase, we will look specifically at how the app can complement the infection tracking work being done in the municipalities. After this quality assurance period, the alert function will be launched throughout the country.”
Knudsen also stressed that the app would not be used to monitor people for any purpose other than for controlling the pandemic.
A survey commissioned by the Norwegian health authorities has found that 64 percent of the Norwegian population was positive to the idea of the app, with only 16 percent against.
“All data in the app will be continuously deleted after 30 days, and the entire app will be deleted in December,”  Health Minister Bent Høie said at the conference. “The app can be deleted at any time by anyone who has downloaded it, and that will mean that all data is deleted.”
When the app was launched on Thursday, many people reported trouble registering it, receiving error messages such as “The custom error module does not recognise this error.”
“We are aware that there are problems completing the registration,” a representative of the Norwegian Institute of Public Health wrote on the Google Play store, after the app faced a deluge of complaints.
“There are many people trying to register at the same time which creates some challenges. We are working to fix the problems.”