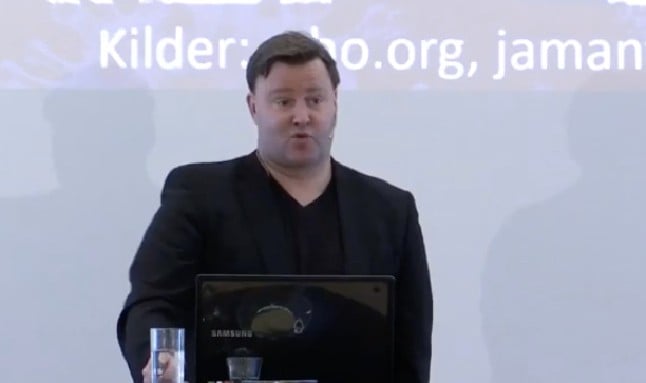 Espen Rostrup Nakstad during a presentation to health workers at the start of March. Photo: Directorate of Health/Screengrab
The health official, who has been the directorate's coronavirus figurehead, said that Sweden's health authorities risked being overwhelmed, forcing the country into a sudden shift to more restrictive measures.
“I think the slightly theoretical idea is that if you have a lot of sick people continuously, with a slight 'brake' strategy, such as they are operating in Sweden, that will then be much easier to control. I think that is completely wrong,” he told the country's NRK broadcaster in an interview.
Nakstad told the VG newspaper that he suspected that Sweden would sooner-or-later, like the UK, be forced to move to a more restrictive approach.
“We see that countries that have tried such a brake strategy, such as the UK and Sweden, have quickly had to move to a more powerful 'knock-down' strategy to control the spread of the infection,” he said.
As of Wednesday afternoon Norway had reported just 93 deaths from coronavirus while Sweden had reported 687, despite having about half the population.
But this has been achieved by suppressing the virus, not stopping it, the Norwegian Institute of Public Health emphasised on Sunday in a report to the country's government. The institute advised Norway's government to start preparing the population for a peak in infections which would see a much greater number of people being hospitalised.
READ ALSO: Norway has not reached coronavirus peak, health agency warns
Nakstad said that by tolerating a higher level of infections in society, Sweden was at a greater risk of sudden outbreaks which could overwhelm the health system
“There will be a significantly greater risk of new, uncontrolled, large outbreaks of infection when many in the community are ill at the same time,” he said. “There is little doubt that it takes less intervention to handle a situation with fewer  people in society sick with covid-19 than one with many sick people.”
When confronted with Nakstad's quotes at a press conference on Wednesday, Sweden's state epidemiologist Anders Tegnell said that Sweden's strategy had been misrepresented.
“I don't recognise it. We have never wanted to have many sick people at the same time, but quite the opposite. We have never had that idea,” he said according to the Dagens Nyheter newspaper.
He recognised, however, that Norway's efforts to slow the spread of the virus had been very successful.
“The curve is significantly down there, much better than the curve looks in Denmark, for example,” he said. “But it will be extremely interesting to see what happens when they relax it all. That's what all countries are worried about. How do we get out of here when we have closed down the whole of society?”.
Nakstad conceded that it was still too early to tell which strategy would be best in the long term.
“We have to work out the way forward on the go, and neither strategy will reduce the number of infections to zero before we gain immunity through an effective vaccine, or because the virus mutates into a less disease-causing variant,” he said. “Therefore, nobody knows what the best strategy is in the long term.”
He said Norway aimed to control the infection to gain time during which health officials could learn more about the virus and begin planning for a greater number of patients to need treatment “at a later date”.