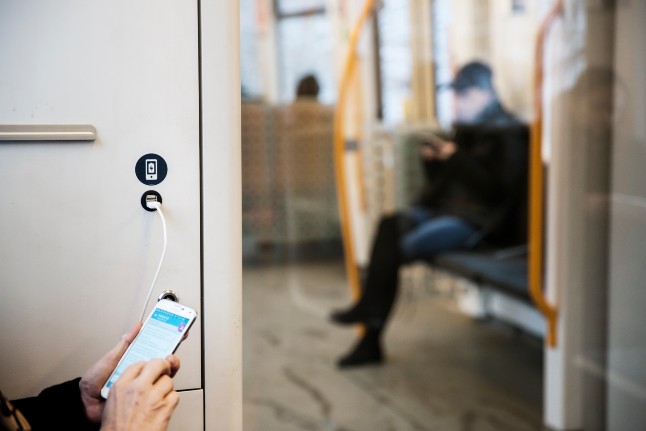 More people in Oslo believed they had caught coronavirus. Photo: Ruter
Only 0.3 percent of those polled for the survey said they have had coronavirus infections officially diagnosed by the health care system, while 5.6 percent said they believed they had had the disease despite testing negative.
“The lab-confirmed cases are just the tip of the iceberg in terms of the sickness burden,” pandemic researcher Svenn-Erik Mamelund told The Local.
But he said it was likely only a fraction of those who thought they had had the disease had actually had it.
“When people are asked, ädo you really think you have had the coronavirus, you get some people included who mix up the symptoms of the disease with common flu, or pollen allergies. So it's not as if you can use the figures from this survey and think that 11 percent o the total population has had it.”
The survey, which has so far had 1,177 respondents, found that those most likely to believe they have had the virus are between 30 and 44 years old, to work in Oslo, and to live in large households or with their parents.
Workers with high incomes and a higher level of education were more likely to report being infected, but also more likely to say they followed the public advice on hygiene and social distancing.
“The difference in who follows the advice may be related to the fact that it is more difficult to work from home if, for example, you are a carpenter or plumber,” Mamelund told NTB newswire. “It may also be that the study captures that the pandemic has mainly been widespread in Oslo, where people have no choice but to use public transport to get to work.”
On Monday, the National Institute of Public Health (FHI) stated that they now estimate that about 14,000 people have been infected with coronavirus in Norway, about 0.26 per cent of the population. The Institute also estimated that each coronavirus  infection now infects only an average of 0.7 people.
Camilla Stoltenberg, the head of the institute, told NTB that her researchers had had similar results from opinion surveys.
“Many people think they may have had a coronavirus infection. It may be more widespread than we suppose,” she said.
She pointed to a new study from China which found that as many as 80 percent of people may have had the disease without knowing it.