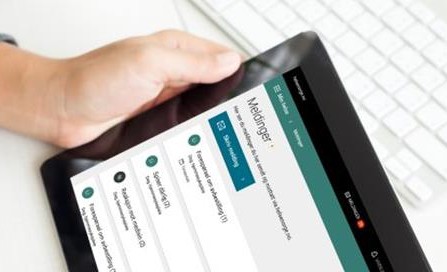 A person accessing the new website on an iPad. Photo: Shutterstock/blackzheep/FHI
“We are very pleased that so many people have reported symptoms. We hope this will give us better knowledge about the prevalence of infection in the population and whether there is a difference between age, gender and location,” Trine Hessevik Paulsen, a doctor at the institute, told the country's NTB newswire.
Norway has one of Europe's most far-reaching testing policies, with 90,248 people tested by Monday night.
Of the 90,248 people who have been tested for coronavirus in Norway after reporting symptoms, less than five percent have in fact been infected with coronavirus, she pointed out, which would indicate that fewer than 2,500 of those who have reported symptoms probably have it.
READ ALSO: 24,000 report symptoms to new Norway app
Frode Forland, Director of Public Health at the institute told NTB on Tuesday that researchers planned to start carrying out random coronavirus tests over Easter to get a better sense of how many people in the country have the virus without it being detected.
“We really need this data quickly,” he said. “We have now seen a study which has modelled it at 22,000 infections. This is the so-called 'dark number'. I think it's a little bigger, considering that we have seen some errors in the model, but we don't know the number.”
The tests will be carried out on a representative sample of the Norwegian population and Forland said he hoped it would be completed over Easter.