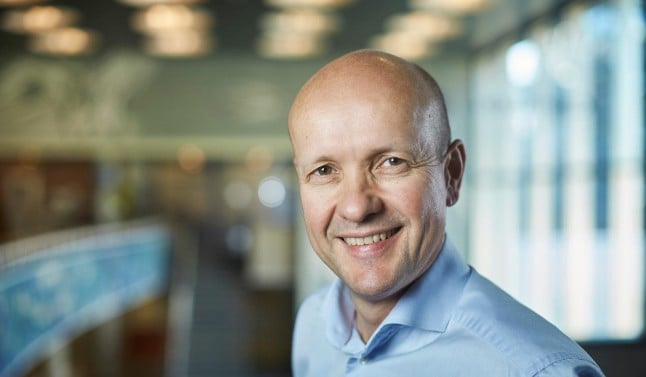 Professor Olav Lysne has led the development work along with 20 researchers. Photo: Simula
“As far as we can tell, this is the only viable strategy to get a western liberal democracy back into action,” Kyrre Lekve, the deputy chief executive of Simula, the software company which has developed the app for the Norwegian Institute of Public Health (FHI), told The Local.
“What we are doing now is keeping everyone away from everyone, and that's economically devastating, so if we we are going to get everyone back into action, we have to find a way of tracking people who have the disease and getting them out of the population.”
The company on Friday confirmed that it had built the app in a statement published on its website. The app, which was developed with help from researchers in the UK, has been completed and is now waiting for approval from Apple and Google to be distributed through their app stores.  It could be launched as early as next week.
“We want to emphasise that this is a trial,” Gun Peggy Knudsen, the FHI's head of Health Data and Digitizatiom, told the VG newspaper. “Many countries are now looking at the same things as we are now in Norway. We think that in this situation we cannot fail to even try, and this will be one of several different measures that can support the detection of infection.”
Although downloading the app will be voluntary, Simula and FHI hope to convince 70 percent or more of the Norwegian population to install it on their phones.
Once installed, it will then send location data back every few minutes to a secure, encrypted cloud database.
When a new patient is confirmed as having coronavirus, the app will then retrieve their location data, and send a text message to everyone who has been closer than two metres away from that person for more than 15 minutes, instructing them to go into quarantine.
“It will probably be launched in not too many days, then the big challenge is to get more than 70 percent of the Norwegian population to use it,” Lekve said.
He conceded that the app was “a very powerful tool” which it would be “possible to abuse”, but said he hoped that Norwegians had sufficient faith in their government.
“This is at the end of the day a question of trust: they must trust us to build the technology without any hidden purpose or function, and they need to trust the government that they are only using this app to monitor the infection and control the spread of the disease,” he said.
That's why, he said, the company did not at present intend to work with any other governments apart from Norway.