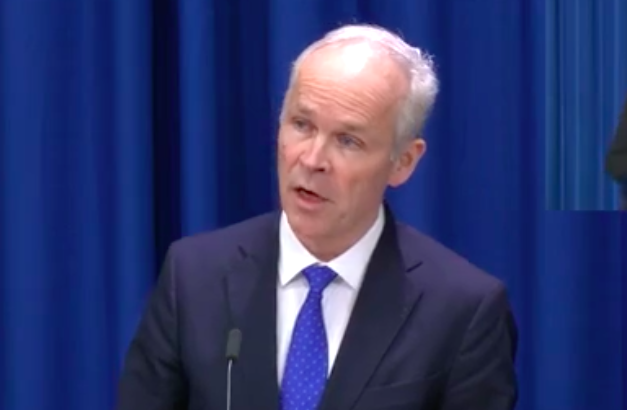 Norway's finance minister Jan Tore Sanner has called on banks to postpone dividends to shareholders. Photo: Screengrab
At a time when tens of thousands of people are losing their jobs in the crisis, the banks' plans to issue generous dividends have not been well-received by authorities and some of the public — who recall the banks' tendency to ask for taxpayer bailouts when things go south.
Among the most radical proposals has been the call by Norway's Financial Supervisory Authority on Wednesday for a ban on financial institutions paying out 2019 dividends “until further notice”.
“A ban on dividend payments and other distributions will have a profound impact,” the government agency said in a statement.
It added that “in view of the widespread crisis the country is in” that it believes “that such a measure is necessary to promote financial stability.”
Late Wednesday evening, the Norwegian government said it would not introduce a ban — though it did not rule out the possibility “in the future” — but urged all banks to postpone their dividends until the economic uncertainty had passed.
“I'm counting on financial institutions to have understood the severity of the economic situation and postpone their dividends to shareholders,” Finance Minister Jan Tore Sanner said in a statement.
In other Nordic countries, authorities have so far stopped short of suggesting regulation, instead urging the banks to reconsider their shareholder payouts.
The Finnish Financial Supervisory Authority said it would “monitor closely” that banks allocate relief measures for their intended purpose instead of paying dividends or bonuses.
“When people risk losing their jobs and companies risk keeling over, it is not the time for banks to pay dividends to their owners,” Sweden's Minister for Financial Markets, Per Bolund told a press conference on Tuesday.
In Denmark, the government and the banking sector agreed on Monday to encourage banks to “reconsider dividend payments and share buy-backs already planned in view of the serious financial situation.”
“During the financial crisis, society supported the banks. Now we are in a corona crisis and here banks should support society,” said Simon Kollerup, Denmark's Minister for Industry, Business and Financial Affairs.
'Neither necessary or desirable'
The Nordic region's typically robust economies have not escaped the economic turmoil brought on by the new coronavirus pandemic: businesses have closed and tens of thousands of people have lost their jobs.
Norway expects GDP to fall by one percent this year and many of the top Nordic companies are feeling the pinch.
Clothing giant H&M has temporarily closed nearly 3,500 stores worldwide and toy maker Lego has closed more than 150 stores.
Airlines SAS and Norwegian Air Shuttle have suspended most of their flights and sent home most of their staff.
As in many other parts of the world, many Nordic companies have suspended or reduced their planned dividends, or are under pressure to do so.
But the region's banks have so far not followed suit.
Sweden's three largest banks have proposed paying out dividends totalling 34.3 billion Swedish kronor ($3.4 billion, 3.1 billion euros), according to a calculation by news agency TT, though they have said they could potentially postpone the payouts.
Finland's Nordea has announced plans to pay out dividends totalling about 1.5 billion euros.
In Norway, leading bank DNB, which is planning on paying out 14 billion Norwegian kroner ($1.3 billion, 1.2 billion euro) in dividends for 2019, said its board of directors would “assess” the situation ahead of its general meeting at the end of April.