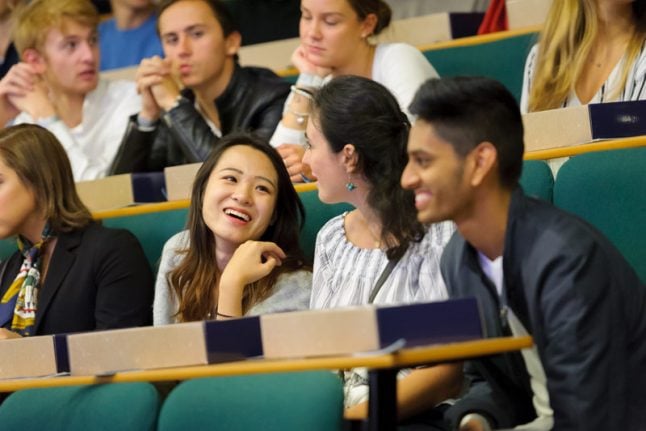 The ESCP class of 2022 includes students from over 50 different nationalities. Photo: ESCP Business School
Even before they reach working age, bright and talented students around the world are increasingly casting their net beyond their home countries when choosing where to pursue their undergrad business degrees.
With the QS University Rankings placing the majority of the world’s best business schools in either the United States or Europe, many students may consider crossing the pond to get their business degree. Likewise, students from Asia, the Middle East and South America also often look to the US or Europe for the right business school.
While neither location is short of highly-respected institutions, there are some significant differences between European and American business schools. ESCP has campuses in Madrid (pictured), Berlin, London, Paris, Turin and Warsaw. Photo: ESCP Business School
Cost
Not least among these is cost. Tuition costs in the United States have more than doubled since the late 1980s and now range from just over $10,000 per year for public, in-state universities to over $35,000 per year for private universities. While tuition costs in Europe vary quite a bit depending on the country, and whether or not the students come from within the EU or not, costs at European business schools are on the whole much lower than their American counterparts.
This price difference is even more pronounced when you consider that bachelor’s programmes in the US typically take four years while at European schools a bachelor’s degree is completed in just three years. Does that extra year of education better position graduates from American universities for a successful business career? Not if you ask Shirley Lui, the Marketing and Recruitment Manager for the Bachelor in Management programme at the prestigious ESCP Business School.
“Our undergraduate programme is three years compared to the traditional four years in the US, so students are out in the workforce a year earlier. And because we require internships to be completed in second and third year, students are fully equipped with experience on their CV and necessary contacts to be employable,” Lui said.
Check out the fees for the ESCP Management programme ESCP’s Bachelor in Management programme is the only one in the world that requires students to rotate to a new campus each year. Photo: ESCP Business School
Global outlook
Lui said that European universities tend to be more international in their focus while American universities are more geared toward priming students for a business career within the United States. The international outlook of European business schools is particularly pronounced in a programme like ESCP’s Bachelor in Management (BSc) programme, in which undergrads spend three years in three different countries, immersing themselves not only in a new culture year after year but also studying alongside fellow students who come to ESCP from near and far.
“Ours is the only undergraduate programme in the world where students are required to rotate and move to a new country every year. With campuses in Berlin, London, Madrid, Paris, Turin and Warsaw, we have some very attractive cities so we draw students from different parts of the world. Everyone is very open minded about learning from each other and actively experiencing their new home city, especially if they moved abroad,” she said.
ESCP’s Class of 2022 includes students over 50 different nationalities covering the Americas, Africa, Europe, Asia, Middle East, and Oceania. In addition to their main business studies, those students also have the local language built into their curriculum, something Lui said makes them adaptable for international careers anywhere in the world.
“Our students speak multiple languages and get an international outlook and approach that will help them in the workplace and make them excellent leaders,” she said. “It is often overlooked, but soft skills and interpersonal skills are very important aspects as people work differently around the world.”
Read more about the cities involved in ESCP’s 3-year rotating campus Imagine studying in not one but three historic European cities. Photo: ESCP Business School
History
With the United States still a relatively young country, another major difference between American and European universities is their age. Not only is Europe home to nine of the ten oldest universities in the world, it’s also where students can find the world’s very first business school: ESCP.
ESCP Business School was established in 1819 in Paris and was France’s only business school for some 50 years. The school’s unique multi-country concept began in the 1970s with the establishment of campuses in the UK and Germany. Other campuses were added through the years, with the most recent expansion being the establishment of a sixth European campus in Warsaw.
“Our six urban campuses are firmly located in very international and corporate metropolitan cities, which gives students a different vibrant experience each year,” Lui said.
Check out videos of students’ experiences in the international BSc programme Shirley Lui. Photo: ESCP Business School
Approach and style
While Lui said that American business schools like Harvard and the Wharton School of Business are clearly among the best institutions in the world, those schools are better-known for their postgraduate programmes. She said that even though ESCP also offers a number of highly-ranked Masters programmes itself, the BSc in Management more than adequately prepares students for the real world. A big reason for that is the mandatory 12-week internships that students complete in their second and third years. There’s also the optional choice of doing an eight-week internship in the first year.
“Because we have such a heavy emphasis on school projects, internships and social impact projects, students are constantly challenged with using their creativity and entrepreneurial spirit to take initiative and solving problems,” she said. “Students work on practical, real-life cases and business simulations forcing them to think on their feet. But because of the diversity of our cohorts, they also get to learn from their peers who have different approaches, too.”
While Lui said that Europe and the United States are both home to numerous quality institutions, she naturally thinks that ESCP has distinguished itself from the pack with a unique BSc in Management unlike any other. She said the rotational model of the programme, and the immersive language and cultural learning that comes with, is an unparalleled enriching experience.
“Our international focus and our diverse cohort are things students can’t find in an American school. You get to move to a different country every year and you do it with classmates are going through the same thing as you,” she said. “How great is that?”
Interested in a 3-year Bachelor in Management degree with international focus and real-world experience? Check out ESCP’s website to receive more information on the programme, course fees, scholarships and more.