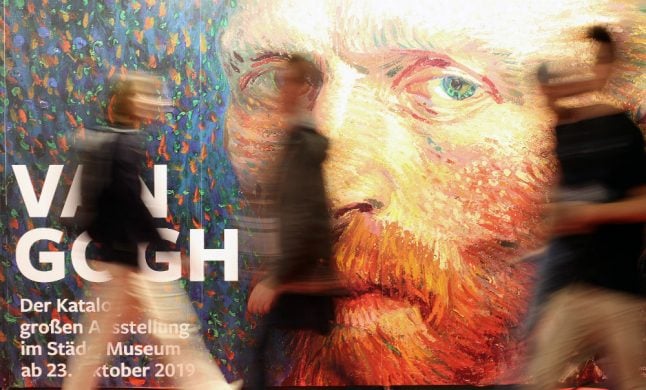 Experts identified the painting as the only work completed by the Dutch master while he suffered from psychosis.

The “Self Portrait (1889)” — which shows the artist giving a haunted sideways glance against a swirling blue and yellow background — was confirmed as authentic by the Van Gogh Museum in Amsterdam.

NEWS! Contested Self-Portrait (1889) in the @nasjonalmuseet Oslo really is a Van Gogh! For the time being, it is the only work he is known to have painted while suffering from psychosis. Read more in our press release: https://t.co/kMf1YMG22b pic.twitter.com/djY16KIZAg

Questions were first raised about whether the painting — owned by the National Gallery in Oslo — was genuine as far back as 1970, but the Norwegian museum finally decided to end the doubts in 2014, sending it to Dutch experts.

Using X-ray analysis of the canvas, studies of the brushwork and references to letters to his brother Theo, experts established it was painted while Van Gogh was in an asylum in Saint-Remy in France in the late summer of 1889.

“The self-portrait that is behind me has been doubted for a very long time,” Louis van Tilborgh, senior researcher at the Van Gogh Museum, told AFP as he showed off the picture.

“It's a work of art that for all kinds of reasons was by him but nevertheless also had certain aspects that were different from other pictures.

“So we had to find an explanation for that and that was difficult, but I think we've solved that and so we're proud that we've more or less given the work back.”

The Oslo museum bought the painting in 1910 from a collector in Paris for 10,000 francs, making it the first Van Gogh self-portrait to enter a public collection, but doubts have swirled about it for some 50 years.

It uses less vibrant colours to other works from the same period, including muted blues and sickly yellows, and some of the paintwork looks less finished.

But the new findings establish the painting as a companion piece to two famous self-portraits finished weeks later when he emerged from his psychosis, now in the National Gallery of Art in Washington and the Musee d'Orsay in Paris.

“Although we were open to all possibilities, of course we are very happy” that the painting is genuine, said Mai Britt Guleng, curator of old masters and modern art at the Oslo museum.

“This is very important for us to know that we have a genuine Van Gogh again in our collection because it has been doubted for several years.”

Van Tilborgh said that unlike them the Oslo painting “firmly depicts someone who is mentally ill”.

A year before painting the self-portrait, Van Gogh had cut off his own ear after a row with his friend the painter Paul Gauguin, beginning a long spell in and out of hospitals and asylums.

The Oslo painting is the only one that can be linked to a self-portrait Van Gogh described in his a letter to his brother on September 20th 1889 as “an attempt from when I was ill”.

The painter was hit by a “severe psychotic episode” lasting a month and a half from July of that year, and although feeling able to paint again by the end he said he was still “disturbed”.

The researchers said the self-portrait must have been painted shortly after another letter dating from August 22nd and before the two more famous portraits he painted in September.

“Although Van Gogh was frightened to admit at that point that he was in a similar state to his fellow residents at the asylum, he probably painted this portrait to reconcile himself with what he saw in the mirror: a person he did not wish to be, yet was,” said van Tilborgh, who is also Professor of Art History at the University of Amsterdam.

“This is part of what makes the painting so remarkable and even therapeutic. It is the only work that Van Gogh is known for certain to have created while suffering from psychosis.”

The painting is currently on display at the Van Gogh Museum in Amsterdam, and will return to Oslo when its new national museum opens in 2021.