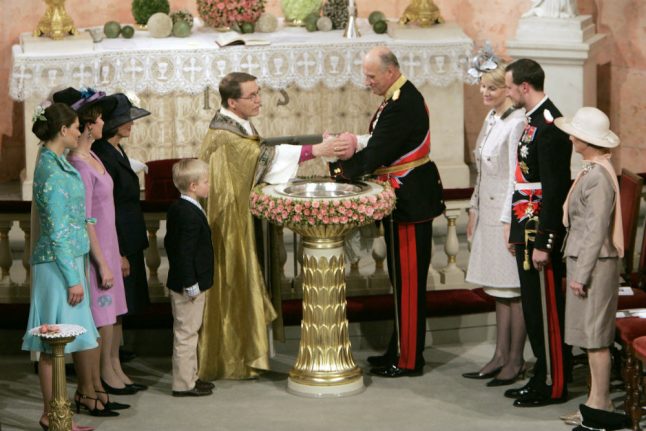 Then-Bishop of Oslo Gunnar Stalsett during the christening ceremony of Princess Ingrid in 2004. Photo: AFP

Gunnar Stalsett, now 84, pleaded guilty to paying Lula Tekle, 55, for housework even after her papers were withdrawn in 2008, denying her the right to work.

The case, revealed by the ex-bishop himself in an interview earlier this year, has put the spotlight on the conditions of thousands of foreigners that Norway, for various reasons, cannot return to their home countries but who at the same time are banned from working to support themselves.

“In certain cases, the conflict between fundamental values and the letter of the law can be so strong that you feel you have no choice but to break the law and accept the legal consequences,” Stalsett told the court.

“That was my situation,” he said.

Several Norwegian media reported Thursday that the right-wing government has reached a compromise to give a special amnesty to those asylum-seekers who cannot be expelled from the Nordic country.

The Oslo court said the former bishop of the Norwegian capital (1998-2005) received a suspended sentence because he had not acted for unscrupulous reasons and because of his advanced age.

READ ALSO: These are the most important issues for Norwegian people in 2019