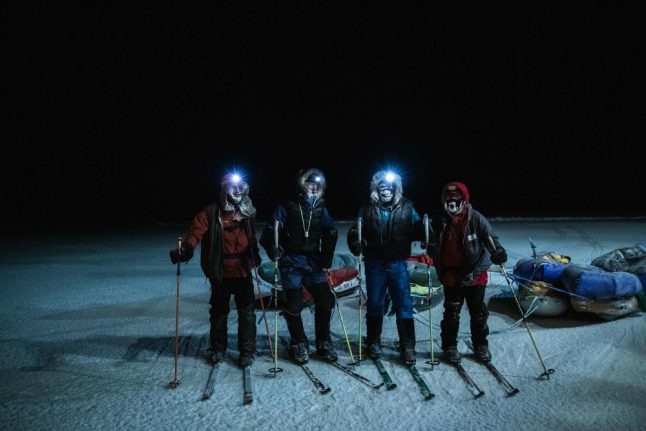 South African-born Swiss Mike Horn, 53, and Børge Ousland of Norway, 57, left Nome, Alaska by sailboat on August 25 as part of Horn's attempt to circumnavigate the world via the North and South Poles.

They reached the sea ice on September 12th and have since been travelling on skis, pulling sledges with supplies behind them.

They passed the North Pole on October 27th and were picked up on the other side of the ice by the Lance icebreaker boat on Sunday, a spokesman for the expedition, Lars Ebbesen, told AFP.

“The skiing part of the expedition is over. It was a wonderful moment when they slowly came to the boat,” he said.

“They are in better condition than we thought and now they can relax.”

The duo ran out of rations over the final week, and two of the icebreaker's crew members had to come and meet them with food on Friday, with the four finishing the expedition together.

The adventurers had planned to finish this leg of the journey in two months, by mid-November, but delays extended the trip to 87 days.

Ebbesen blamed some of the pair's struggles on global warming.

“Because of climate change the ice is thinner than usual, which is more prone to drift,” he said last month when the delay was announced.

According to the ship-tracking website MarineTraffic.com, the Lance is now in Norwegian waters of the Arctic Ocean.

It is heading for Norway's coast, a difficult trip that Ebbesen said could take anything from three days to three weeks.

Horn embarked on the 270,000 kilometre “Pole2Pole” journey in 2016 from Monaco, where he was originally scheduled to end the trip later this month.