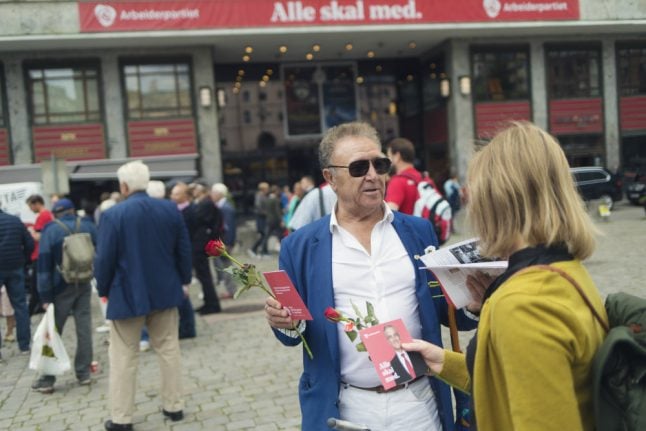 Members of the Norwegian Labour Party hand out pamphlets and roses to potential voters in 2017. Photo: AFP

A total of 49 percent said in a recent survey that they believe that climate change is one of the three biggest challenges Norway faces, according to the wide-ranging questionnaire, Klimabarometeret 2019, conducted by data research company Kantar.

The survey placed climate change at the top of the list of the 14 most important political issues in Norway, VG reports.

Number two on the list is healthcare, which was named by 45 percent of those surveyed, with immigration and integration in third place at 35 percent.

Climate change has never previously topped the survey, which has been carried out in each of the last 10 years.

The issue is high on Norway’s political agenda after a year of massive demonstrations in a number of European countries, led by Swedish activist Greta Thunberg and her school strike for climate movement.

The proportion of respondents who view climate as one of the most important issues has increased by 11 percentage points in the last 6 months, VG writes.

The results also show that there is a generational difference in response patterns to the survey.

People under the age of 45 cite climate change as their most important issue, while those over 45 are most concerned with health care.

Kantar notes that many people come into contact with the health care system later in life, and that this be evidence that people express their own immediate needs in how they respond to the survey.

Political differences are also evident, meanwhile. 88 percent of people who vote for the Norwegian Green Party said that climate is one of the most important issues. The share is 80 percent for Socialist Left voters, 69 percent for (centre-right) Liberal voters and 65 percent for (leftist) Red voters.

For the anti-immigration, right-wing Progress Party, only 13 percent of voters in the survey cite climate as one of the three biggest challenges. Instead, the party’s voters are concerned with immigration, health, crime and transport.

Government climate policy also received a rebuke in the Kantar survey, VG writes, with many respondents critical of a perceived lack of action on the part of Prime Minister Erna Solberg’s administration.

44 percent of respondents said that Norway should spend more money on climate measures, while 18 percent said spending should be reduced.