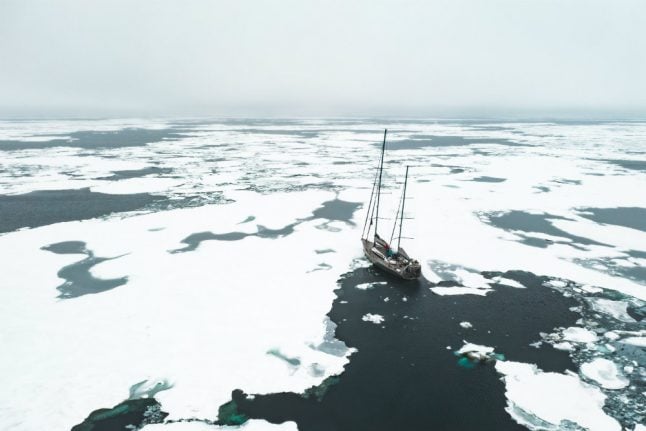 Photo: Mike Horn
Børge Ousland of Norway, 57 left Nome, Alaska by sailboat on August 25, together with his expedition colleague South Mike Horn, 53, from South Africa.
Since September 12, when they reached the sea ice, they have been travelling on skis pulling sleds with supplies. They had planned to complete their journey by reaching the edge of the sea ice by mid-November.
“Because of climate change the ice is thinner than usual, which is more prone to drift,” a spokesman for the expedition, Lars Ebbesen, told AFP.

Expedition Update // The ice has changed to the better today, bigger pans of one year ice, around 1 meter thick, so that's good. Very smooth and few leads. We haven't seen the sun for about a week now, and it's getting darker. Harder to see the contrast on snow. We will ski as long as we can without headlamps, to save power, but think we must use it before the Pole. One of the few days without paddling. Our Alpacka rafts have been a great tool to cross leads, very versatile we haven't used our swimsuits at all, it's much faster with raft. Also on thin ice, we skirt across in rafts using ski poles, very efficient. Lat 88.623211 Lon 139.0611 Photos with @MikeHornExplorer on our North Pole Crossing @Norrona @Helsport @DevoldofNorway @IceLegacyProject @Roam #NorthPole #BorgeOusland #Arctic #Explorers #explore

Normally there would be a positive drift of a few extra kilometres per day, “but the winds are pushing the ice toward Greenland and they have gone backwards three to five kilometres per day,” he said.
The team now hopes to reach their goal within 10 or 12 days, which is how long their rations will last.
“There is no danger, no huge drama. But it is touch and go — a mad dash to reach the goal. We are considering how to get more food to them in case it takes longer.”
He said weather patterns were now changing and more favourable northerly winds were forecast. The pair have not asked to be evacuated. Photo: Mike Horn
A spokesman for the Joint Rescue Coordination Centre in Northern Norway, Bard Mortensen, told AFP rescuers were exploring possibilities and “considering precautionary plans at this point” in case an evacuation were to become necessary.
“There is no evacuation underway … they are determined at this point to make it on their own,” Mortensen said.
A helicopter in Longyearbyen, the main town in Norway's Svalbard archipelago, would be able to rescue the pair, or a ship, he said.  Ebbesen said Horn and Ousland were in “surprisingly good condition” considering their feat.
“They have a little frostbite but that's quite normal.”

#NorthPoleCrossing // @MikeHornExplorer broke off a tooth while chewing on a piece of chocolate some days ago, but we have temporary filling material and it is now fixed. Still this irritating east wind pushing us west, but it's supposed to change over the weekend. Miker and I have crossed some really big frozen leads today and yesterday, if we meet them when just opened, we will have to spend time walking around them. – What a miserable life we have here. Stumbling around with headlamps all day, and in the tent brushing ice out of our clothing and sleeping in a plastic bag! A bit rough ice today, paddled two open leads and skied across manu many frozen ones, we feel that it's a bit unfair to have such bad luck with the winds normally we should be drifting several km south here, but we are pushed east instead, a bit unfair after all the struggle. But we must just go on. – Photos with @MikeHornExplorer on our North Pole Crossing 2019 @Norrona @Helsport @DevoldofNorway @IceLegacyProject #NorthPole #BorgeOusland #Arctic #Explorers #Explore #IceLegacyProject #IceLegacy #DevoldPioneers #Helsport #Norrona

Horn's 26-year-old daughter, Annika Horn, meanwhile told French newspaper Le Parisien that she had heard from her father and he sounded very downbeat.
“His morale is very low. I've never seen him like that, in such an extreme state of fatigue… My sister Jessica and I just want him to come home soon,” she said.