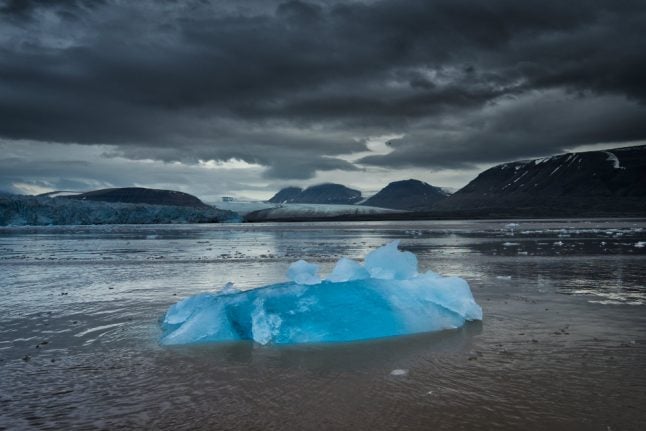 Seeking a new adventure and excited by the prospect of not hearing the word Brexit for a few days, I left my native London (via Oslo) and headed for the town of Longyearbyen on the archipelago of Svalbard.

Svalbard has the distinction of being 78 degrees north in latitude and one of the world’s most northerly settlements. It’s recently transformed from a coal mining outpost to an adventure holiday destination.

That is fortunate for me: I intended to go glacier hiking, but due to adverse weather conditions on the Lars Glacier, my hike was cancelled and I had to make alternative arrangements.

We shuffled in and boarded the rib boat. Our skipper and guide Erlend Østbye Bratlie raised his voice, “It’s a wet and bumpy ride if you sit at the front of the boat!”

The other tourists and I briefly looked at each other, and like a game of musical chairs, we all headed quickly to the back of the boat. Seconds later and slightly embarrassed, I found myself at the front of the boat, the engine now running and there was no going back. Oh well, bring it on!

We made fast and invigorating progress to the glacier. Erlend keenly pointed out in the distance the perched puffins on the mountain rocks and a small school of Beluga whales near the mountains shoreline.

Our skipper took an exciting sharp turn like a James Bond villain in chase, and we managed to take a closer look at both creatures. We could now see Puffins taking flight from the rocky cliffs, and the Belugas no longer looked like mysterious shapes in the ocean, but a sight to behold.

Our guide stopped the boat just before reaching the glacier and told us a couple of old trapper stories that have become legendary in these parts.

This was real wilderness now; there had been no other boat in sight for some time. Our rib boat began to weave through a cluster of mini icebergs. I half expected to see Leonardo DiCaprio clinging onto a piece of driftwood and Celine Dion singing in the background.

Looking up, the vastness of the Von Post Glacier was becoming clearer. It’s majestic,15 kilometres long and over 100 square kilometres in area, and it did not disappoint. Now, I really felt very small in the big outdoors. On our return to Longyearbyen we saw not a school, but what I can only describe as a party of Belugas. Wave your pectoral flippers in the air… like you just don’t care!

Erlend stopped the boat one last time, and this time the whales were approaching us. The connection between the passengers and the Beluga was a few minutes of magic.

There was a cacophony of noise! At a quick count, there must have been at least 50 huskies howling in unison. As I tentatively entered the dog yard, I thought I should have brought a spare set of underpants. I hoped this was the huskies’ way of saying an enthusiastic hello.

The canine excitement was reserved for one man, Jan Hvizdal, our guide from Green Dog Svalbard. Jan encouraged me and two other travellers to get involved.

He asked us to assist him in bringing some of the dogs from their kennels in the yard, to the sled and attach them to their harness. I first walked ‘Buster’, and then ‘Garlic’ to the sled, and both dogs could not get to the sled quick enough.

Suddenly, I was comfortable with the huskies: they were so friendly and desperate to start running. We left the dog yard at an invigorating pace, and the transformation of the huskies’ personality began. They were now running silently as a pack, in deep concentration on the task in hand. If any dogs moved out of line, Jan’s instructions would have them back on track. “Garlic go right!” our guide said in his authoritative tone, and indeed ‘Garlic’ would rejoin the pack.

The dog-sledding journey takes place in beautiful surroundings around the Advent Valley with Longyearbyen in the distance. The feeling of life beyond the frontier takes on another level. When we returned to the dog yard, we had the heart-melting pleasure of cuddling the latest litter of puppies, the next generation!  This experience was more than just a ride with huskies, and I felt I had an authentic window into their way of life.

My final excursion lies at the foot of the Breinosa Mountain, in a wooden log cabin a few kilometres outside of town. Only a few days ago, a polar bear had been spotted in the area, and this was a big talking point back in Longyearbyen.

Along with a group of tourists from all over Europe, I met Lucian Negrut, our wilderness storytellers, cook, and security man. Lucian had a rifle slung over his shoulder, a Nordic jumper, and an impressive beard. It was unspoken within the group, but everybody knew we were in safe hands.

Lucian invited us into the cabin; I don’t think I have ever felt so cosy in my life! Rustic wooden tables and benches around the edges of the cabin and a large cast-iron cooking pot centre stage, over an inviting warm fire. Two fascinating stories were told within these wooden cabin walls. Firstly, how the Dutch discovered Svalbard and the life of the early settlers, during this story, Lucian would occasionally stir the cooking pot. He was making a homemade reindeer Bidos (a classic Arctic stew), and the aromas were tickling my taste buds.

Between stories, we had dinner, served courteously by Lucian. I thought it might taste a little too rich for me; however, it was delicious!

The second half of the evening was dedicated to Svalbard Royalty, the polar bears. Their remarkable and challenging life beautifully told in an engaging way.

I came away from the experience, happy, slightly hungover and with a renewed appreciation of the art of storytelling. Lucian played the leading role exquisitely and was supported by a charming log cabin in a wonderful setting. Peter Elia is a photographer from London who travels the globe in search of adventurous pursuits and great walking routes. For more fantastic images from Peter, visit The man who hiked the world on Instagram and also feel free to join his Facebook page.