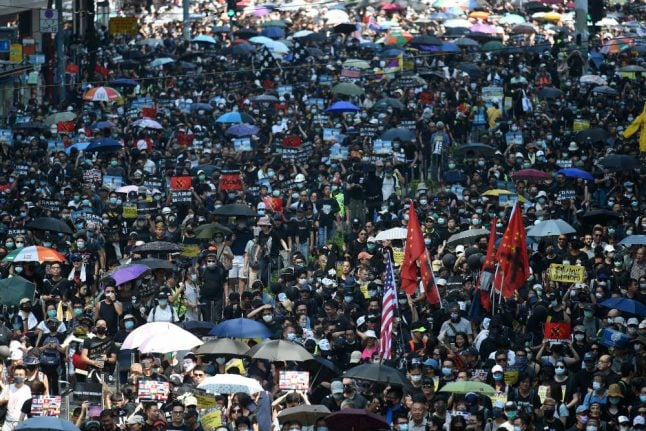 People take part in a march in the Causeway Bay shopping district in Hong Kong on October 1st. Photo: AFP

At a press briefing, foreign ministry spokesman Geng Shuang called for the “relevant people to be objective and just” as well as “cautious.”

“Hong Kong affairs are purely China's internal affairs and no foreign government or individuals have the right to interfere,” Geng said.

Semi-autonomous Hong Kong has been hit by months of pro-democracy protests, which Beijing has portrayed as riots fuelled by foreign forces.

Activists say freedoms in the city are being eroded by Beijing — contrary to a 50-year deal that outlined Hong Kong's return to China from British rule.

Guri Melby, a member of Norway's parliament for the Liberal party, said on Tuesday she was nominating the territory’s people for the Nobel Peace Prize.

“I have nominated the people of Hong Kong, who risk their lives and security every day to stand up for freedom of speech and basic democracy, to the Nobel Peace Prize for 2020,” Melby wrote on Twitter.

I recently visited Hong Kong, where I was appalled by the stories of police brutality and impressed by the courage of the protesters: pic.twitter.com/vlUjTgOXuO

In an interview published by the newspaper Aftenposten on Wednesday, Melby added that “what they do has an impact far beyond Hong Kong, both in the region and in the rest of the world”.

Millions have taken to the streets of the city over the last four months in the worst political crisis since the 1997 handover.

Protests were initially against a now-dropped bid by its leaders to allow extraditions to the Chinese mainland, but snowballed into a broader push for democracy.

Beijing has had a tense relationship with the Nobel Committee.

In 2010 the award was given to imprisoned Chinese dissident Liu Xiaobo, a writer, philosopher and veteran of the Tiananmen protests, who died of cancer in 2017.

Although the Nobel Committee is independent of the government in Norway, Beijing froze its relations with the Scandinavian country in response to the award, suspended negotiations for a free trade agreement and blocked imports of Norwegian salmon.

Relations between the countries did not normalise until December 2016, after Oslo committed to not “support actions that undermine” Chinese interests.

In 1989, the coveted peace prize was given to Tibetan spiritual leader the Dalai Lama, who Beijing accuses of trying to split China.