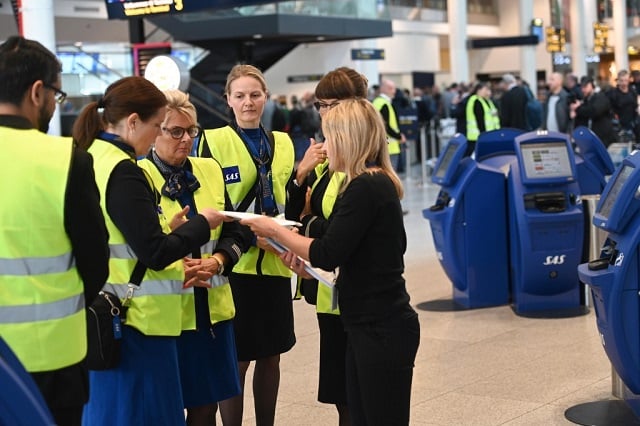 “I'm relieved to inform our customers and employees that we can now put this conflict behind us,” SAS CEO Rickard Gustafson told media in Stockholm late on Thursday, at a press conference delayed by several hours.

This meant that many flights were set to depart on schedule on Friday, but there was still a risk of delays and some cancellations.

“We are now running traffic, but it will take a while before everything is back to normal,” SAS chief press officer Freja Annamatz told the TT newswire on Friday morning. She advised passengers travelling on Friday to check the airline's website for up-to-date information.

Gustafson had said at Thursday's press conference that traffic would be running completely as normal within around 24 hour's time, in other words by Friday evening. This is partly because many planes are not currently in the correct location due to the strike.

READ ALSO: What are my rights if a flight is cancelled or delayed?

Negotiations between the two parties resumed on Wednesday for the first time since the strike broke out five days earlier, but despite intensive talks no solution was reached until late on Thursday.

Over 1,400 pilots in Denmark, Norway and Sweden began striking after the main pilots' union failed to reach a collective bargaining agreement with the company.

One of the major sticking points was the issue of scheduling, with pilots saying that unpredictable working hours sometimes left them working seven weekends in a row. SAS said that pilots had also requested a 13 percent salary raise, significantly more than the 2.3 percent offered by the airline.

The final agreement reportedly reportedly guaranteed them a 3.5 percent increase for 2019, along with improved job security and more predictable work schedules.

The airline has suffered major economic losses as well as harm to its reputation, with some experts estimating the daily cost of the strike at between 60 and 80 million kronor per day. Gustafson did not name a figure, but told reporters: “Of course this has cost us both money and trust.”

SAS shares have lost nearly a third of their value since early February, dropping significantly throughout the duration of the strike, but rose by nine percent on Thursday after reports of an imminent deal.

IN NUMBERS: The impact of the SAS airline strike