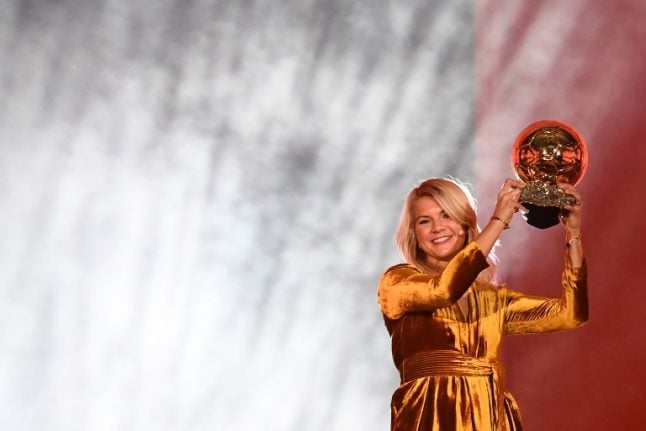 The 23-year-old aptly wore a gold dress as she picked up the inaugural prize at the ceremony in Paris, joining men's winner Luka Modric and best young men's player Kylian Mbappe on stage with her trophy.

She was voted for by a panel of journalists from around the world on the strength of her prolific form for French giants Lyon, with whom she has won three consecutive Champions League titles.

Back in Norway, meanwhile, there have been renewed calls for her to end her exile from the national team.

Hegerberg slammed the door shut on her international career in the wake of Norway's desperate showing at last year's European Championship in the Netherlands, when they finished bottom of their group and failed to score a
single goal.

Without her, though, Norway fared better in World Cup qualifying, topping their group ahead of the Dutch, and they will go to next year's finals in France. Officially, however, the door is open for Hegerberg to return.

“Hopefully, Ada maybe changes her mind and maybe she can be a part of the national team in the future,” Norway coach Martin Sjogren told AFP.

“As a national team coach, you always want the best players but you cannot focus on the ones who don't want to be a part of it.”

The Norwegian Football Association duly congratulated Hegerberg for her award on Twitter, but Sjogren says he has no intention of contacting her.

“Playing for Norway, that decision must come from Ada herself, I think.”

It is nevertheless hard to imagine the World Cup going ahead in six months without the first ever Ballon d'Or winner, all the more so as the final will be played in Lyon. Saturday's draw for the competition will now be clouded by the threat of Hegerberg not taking part.

“At the moment I would say no,” Sjogren said when asked if he thought Hegerberg would return.

“But you never know what will happen. It's still half a year until we get to the championship.”

The player herself — whose elder sister Andrine plays for Paris Saint-Germain — does not seem likely to change her mind any time soon.

“There would need to be a good few changes for me to consider returning,” she told Norwegian broadcaster NRK on Monday.

“It is not a matter of whether I should change my mind. The question is more what the FA and the national team have to do to improve, and there is a long way to go in that regard.”

Hegerberg's relationship with her now ex-teammates and the Norwegian footballing authorities is perhaps summed up by the fact she was not even included in a team of the year selected by the national players' association last weekend.

Those who don't like Hegerberg label her a “prima donna”, comparing her to former Sweden men's star Zlatan Ibrahimovic.

In September, NRK claimed her former national teammates were demanding an apology from Hegerberg for comments made after Euro 2017.

“I always feel that I have become a worse player when I come back from national team get-togethers and that shouldn't be the case,” she told newspaper Aftenposten.

Norwegian media also claimed Hegerberg had broken off all links with her former teammates on social media after they qualified for the World Cup.

“The prima donna image that some have given her is a load of nonsense,” protested her mother, Gerd Stolsmo, in a TV interview on Monday.

Nevertheless, it is far from certain her mother's comments will lead to a thaw in the frosty relations between Hegerberg and the Norwegian team.