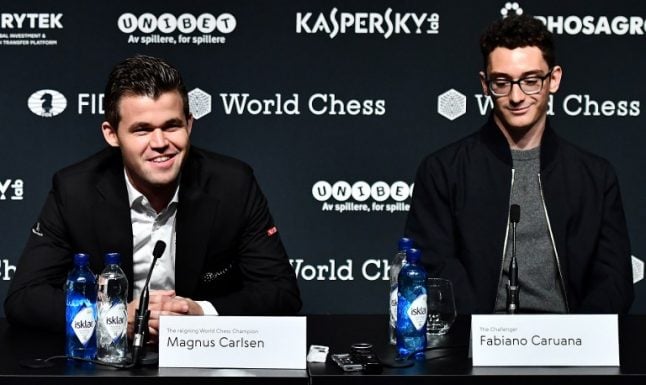 Norwegian master Carlsen, 27, is seeking to cement his reputation as history's greatest chess player, while 26-year-old Caruana is a prodigy helping to return mass appeal to the highbrow game.

The pair will face off a maximum of 12 times from Friday until November 26 — with games scheduled to start at 1500 GMT — in the bi-annual contest held in a former London art and design school building.

Chess has its own unique scoring system that awards the winner of each game one point, while a draw sees the contenders get half a point each.

The title goes to the first person to reach 6.5 points, with a rapid series of tiebreakers played in case the two are level after the first 12 games.

Carlsen — a superstar at home in Norway who is also a part-time model — excels in such playoffs, as he demonstrated in 2016 in New York against Russia's Sergey Karjakin.

Introduced to the game at a young age by his father, he was a “great international master” by 13 — holding Garry Kasparov, the Soviet and Russian legend whose record ranking Carlsen eventually broke, to a draw.

“There is no doubt that Carlsen is one of the best chess players ever,” British Chess Magazine editor Milan Dinic told AFP.

Carlsen, the reigning champion since 2013 and one of the faces of a street-smart Dutch apparel brand, is seen as a nearly flawless chess player who has helped make the game's image more fun.

Dubbed “the Thor of chess”, he is credited with having a formidable intuition and a prodigious memory that allow him to have a vast repertoire of moves.

“I don't think that Magnus has any clear weaknesses,” Caruana told a joint news conference on Thursday.

“That being said, he still makes mistakes and we all do and the only challenge is to be ready to take them when they come.”

Carlsen conceded he has not been playing at his highest level lately but said he was “confident” he could turn his form around.

“Fabiano is a tremendous player, his results this year speak for themselves,” he added.

“I know if I continue to play in the same vein I've been playing recently, I will probably not win, so I need to step it up.”

Caruana earned his shot against Carlsen by winning the Candidates Tournament earlier this year in Berlin, and the Italian-American from Miami will take heart from having held his opponent to a draw in August.

He has climbed up the FIDE chess federation's rankings in recent years to occupy the number two spot — just three points off Carlsen's total of 2,835.

Americans have not had a chess hero since Fischer stunned Soviet champion Boris Spassky in an epic series in 1972 that epitomised the Cold War rivalry between the two superpowers.

But any comparison with the US legend would be premature at this stage, Caruana cautioned.

“If I become world champion the comparison will be more apt,” he said, noting he has a markedly different chess style and life story to Fischer, who lived out his later life in isolation in Iceland.

With Carlsen's modelling profile and Caruana's appeal in America, tournament organisers World Chess are hoping to conquer new audiences with the match-up and future board battles.

Many believe the 1,500-year-old game can adapt well to the digital age, with a plethora of dedicated websites and apps awaiting a bigger audience.

“There's a lot of people in the celebrity world, movies and music, who have an interest in chess,” said Caruana.