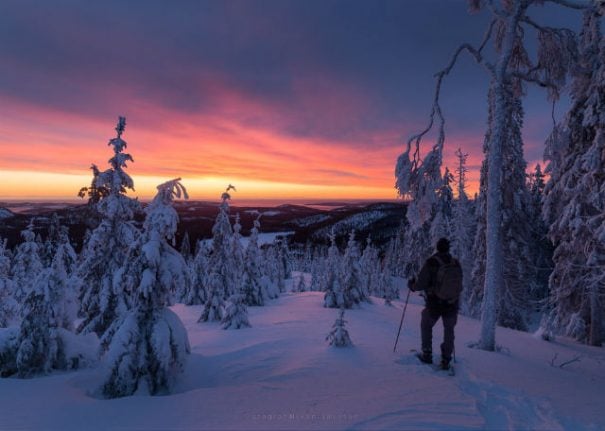 Instead they voted for the High Coast, the majestic mountainous coastal stretch of the Bothnian Gulf in Västernorrland, 500 km north-east of Stockholm.

“Where?”, chorused millions of baffled non-Swedes.

The High Coast may be a mystery to everyone else but the Swedes are justifiably proud of this UNESCO World Heritage Site.

The High Coast is loved by Swedes for its vertiginous granite cliffs and spectral stony islands rising from the sea. This extraordinary natural beauty is a consequence of a post-glacial rebound following the retreat of the vast ice sheets that blanketed northern Europe 10,000 years ago – the land has risen as high as 286 meters (938 feet) which is the highest-known level of rebound in the world. And it’s still rising by 4mm a year!

This part of Sweden may be largely unknown, but it offers a huge variety of opportunities for leisure and business.

1. When it comes to having fun, the High Coasts rocks! Kayaking away from Veåsand, at the foot of Mount Skuleberget. Photo: Fredrik Lewander

The High Coast is not just spectacularly beautiful – its unique combination of ocean, mountain and forest landscapes offers a unique playground in which to enjoy outdoor life. Hiking, surfing, fishing, kayaking, climbing and skiing are all possible at different times of the year. And then, when you want to kick back, the High Coast also offers highly-acclaimed drinks from local producers, such as Hernö Gin and High Coast Distillery.

2. The tourism industry offers a vast vista of opportunity It might be unheralded outside Sweden but the High Coast has a booming tourism industry. Tourism in the rest of the country may have remained steady over summer, but it skyrocketed in the High Coast which saw a 29.4 percent increase in overnight trips.

However, demand is fast outpacing supply. Have you always dreamt of running a dog sled outfit or becoming a fishing guide? Or do you fantasize about opening a boutique B&B or a luxury resort in the abundant beauty of the Sweden countryside? There are so many opportunities for growth in the recreation and tourism industries that you’ll almost be spoilt for choice on the High Coast.

3. The High Coast is a magnet for the ICT industry It’s not just tourism that’s thriving in the High Coast region. Incredibly, employment in the ICT sector is 40 percent higher in the Sundsvall area of the High Coast than in the rest of the country. To highlight the area’s strength in the ICT sector, the Swedish government recently established DIGG, the national authority for digitizing the public sector in Sundsvall

4. Innovation is threaded through the DNA of the region. The High Coast is a true hotspot for innovation and growth. This is from where BizMaker operates, a business incubator that has coached a startling 438 new startups. The results of such a can-do attitude is obvious. The Swedish innovation agency Vinnova ranks BizMaker as one of the best-performing incubators in the country. In the High Coast you will also find innovative companies in all sectors, like Peckas Tomater, the largest aquaponics farm in Europe and Stringo, that produces a smart and user-friendly vehicle mover that is being used by car producers and car dealers all over the world.

5. The mission to replace oil with wood Another prodigious child of High Coast inventiveness is one of the most progressive and successful bioeconomy clusters in the world. This cluster features well-established traditional companies as well as agile and nimble startups implementing and finessing groundbreaking R&D. The aim? Nothing less than to replace oil with wood! Right at the vanguard of this biorefinery innovation is Processum, a company based in the north part of the High Coast. But, when you live somewhere as astonishingly beautiful as the High Coast, it can’t all be about work. And there are a multitude of ways to let off steam. There’s hiking for one: head to Skuleskogen National Park, a magical but accessible park that has lush old-growth forests, sheltered sandy beaches and spectacular views of the Bothnian Gulf bejeweled with green islands. One of the many surf spots along the coast of Härnösand. Photo: Mats Forssell

Or try taming the surf of the Bothnian Gulf. The High Coast offers surf spots which suit beginners as well as advanced surfers. Smitingen in Härnösand has some of the best waves in Sweden and is a magnet for both the local surf community as well as visiting enthusiasts.

8. The dark, rather smelly, side of the High Coast

There have to be some downsides to life on the High Coast, right? Well, the pungent Swedish, er, delicacy, surströmming (fermented herring, tins of which are not allowed on aircraft due to their propensity to explode!) is thought to have originated in the High Coast area, although nobody seems that keen to take responsibility for inventing a foodstuff that smells literally of death.

Oh, and the area also has a measure of notoriety for a spasm of witch trials in the 17th century, the worst of which saw 71 people executed in one day in Torsåker.

9. A region that produces sporting legends But, despite the rotten fish (or is that because of?), they breed them tough up here. The High Coast has produced a raft of overachieving sports stars. At the last Winter Olympics in South Korea, High Coast athletes were responsible for more than half Sweden’s 14 medals, while, out on the ice, the NHL in north America has gone pucking crazy for the likes Peter ‘Foppa’ Forsberg (Philadelphia Flyers) and twins Henrik and Daniel Sedin, who are generally acknowledged to have been the greatest players in Vancouver Canucks’ history.

10. And it doesn’t cost a fortune to live here So, astonishing natural beauty, boundless recreational activities, great public services, cutting-edge technology and a thriving commercial and civic life – there has to be a catch. Property must be vastly inflated, surely? Not at all. Spacious houses in the countryside with a parcel of land can be bought for as little as €40,000 ($45,000).

That’s a formidable combination of benefits and advantages. The High Coast really does have it all.

This article was produced by The Local Creative Studio and sponsored by High Coast Invest.