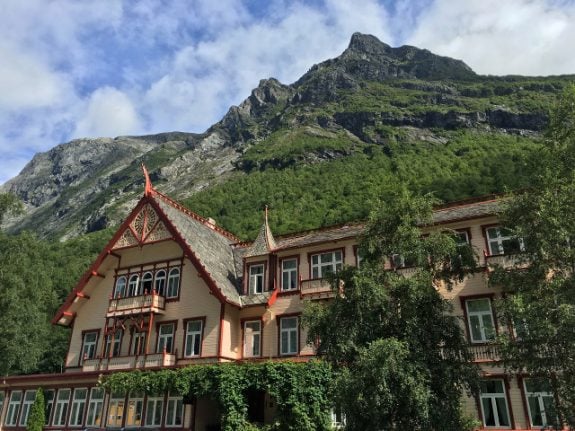 Whether you believe in supernatural legends and ghost stories or not, a trip to some of Norway’s most haunted places is sure to leave you chilled to the bone. Happy Halloween! There's no doubt about the number one haunted place in Norway, and it just so happens to be one of the country's better-known buildings.

The castle has stood guard over the city of Oslo for more than 700 years. During its life it has served as a prison for some of the country's most dangerous criminals and an execution site during the World War II occupation.

With its history of keeping prisoners in irons and chains and sentencing them to gruelling physical work, it's perhaps no surprise that this place has its fair share of ghosts and ghouls.

The best-known spirit is the Malcanisen, the so-called “demon dog” that is said to guard the gates to the castle after being buried alive hundreds of years ago. Legend has it that anyone approached by the phantom pooch can expect a horrible death in the months to come.

Many people have reported hearing whispering and scratching sounds inside the fortress, and some guards (the site is still an active military site) report the sensation of being pushed while patrolling the corridors. Perhaps the culprit is Mantelgeisten, a ghostly woman often seen walking near her former bedchamber. While Trondheim's Nidaros Cathedral has stood by the river in the city for almost 1,000 years, the first known story of a haunting didn't occur until 1924 when a bishop’s wife claimed to see a ghostly monk with bright blue eyes and a bleeding gash across his throat.

It’s a curious sighting indeed, because historians claim that the cathedral – which has a long and varied history – was never connected to an order of monks.

Despite this, similar reports have come in thick and fast. The monk is said to approach and walk straight through people during services and in the cemetery. Distant chanting and the sound of organ music have also been heard late at night in the cathedral grounds.

This stunning rural hotel near the Hjørundfjord is a popular photo stop for people travelling the Royal Fjord Route between Ålesund and the Geirangerfjord. With mountains towering behind, a beautiful façade and the glistening water just steps away, it's easy to see why.

But check-in to this charming old building and things take a different turn. Arriving guests are treated to the story of the servant girl Linda and a German duke, who both committed suicide in the nearby fjord.

Reservations must be made months in advance to stay in the blue room, where many visitors report hearing her footsteps and sobs during the night. The cleaning staff frequently report the unlocking of doors and lamps being switched on and off.

This former Soviet settlement on the Norwegian arctic archipelago Svalbard is so notorious it ranked in National Geographic's top ten ghost towns in the world.

Once a busy mining outpost, Pyramiden has essentially been left to rot, unchanged since operations ceased in 1998. Cups were left on the tables, newspaper clippings pinned to the walls, and skis propped up in the corridors.

While the settlement doesn't report much in the way of paranormal activity, there can be few visitors who don't feel a chill when touring the buildings of this isolated ghost town. These days, it’s possible to stay overnight in the Pyramiden Hotel, if you dare.

Bærums verk: The phone inside the administration building at this former ironworks turned shopping centre on the outskirts of Oslo is said to ring at the exact same time every night. When picking up the phone, a strange static can be heard, something that the phone company apparently have no explanation for. Others claim to have seen the ghost of a former owner in the Vertshuset restaurant.

The old Lier asylum: These imposing buildings near Drammen have sat unused since closing their doors in the 1980s. Because of the buildings’ deterioration it is now forbidden to enter the site, but those who have been there have reported cold temperatures and negative energy. Perhaps that’s little surprise, given that patients here were said to have been kept in cages, lobotomised, and treated with LSD.

Nes church ruins: People walking around this former church on the banks of the Glomma river in Akershus report feeling resistance when walking, torches that turn themselves off, and problems with lights and locks on cars. Locals believe the spirit of former priest Jacob Christian Finckenhagen is responsible. Some say his children were entombed behind the altar, others claim he hung himself in the church.

Dalen Hotel: Another hotel to make the list with a haunted guest room. The Dalen Hotel’s room 17 was home to a pregnant English lady for several months, before she fled the hotel leaving her dead newborn behind. Both guests and staff have reported sightings, so much so that a table is still set for her in the hotel’s restaurant every day.