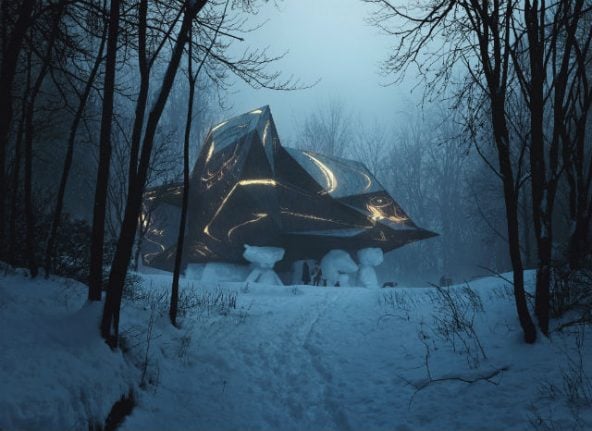 Snøhetta's design for A House to Die in has been likened to a UFO. Photo: Snøhetta
“We want the site where the death house was intended to be placed to remain a green area for the benefit of the local population, and we encourages Bjarne to find a new site for the project,” city councillors from the Labour, Socialist Left, Green, and Progress Party said in a joint statement.
The A House to Die in project started in 2011 when the New York artist contacted Olav and Frederik Selvaag, the brothers who control Norway’s Selvaag Group, about building a sculpture that would double as a house for Melgaard and his parents.
The brothers made available an empty plot next to Edvard Munch’s winter studio where their family’s Villa Kikkut had stood until it was demolished in 1989.
The architecture firm Snøhetta then worked with Melgaard to design an angular black wooden house with Melgaard’s drawings etched into it, resting on columns made out of his cartoon-like white animal sculptures. The structure has been likened to a UFO.
Melgaard has previously agreed to move the house so that only the road leading up to it encroaches on public land, but while the national and city conservation authorities have accepted the new plans, the city's politicians have now decided to put an end to the project.
In a text message sent to the Aftenposten newspaper, Melgaard said he was not surprised. “There is great opposition to new things in Norway,” he said, refusing any further comment on whether he would seek a new site for the project.
Melgaard, described by the New York Times as the “projectile vomiter” of the art world, is no stranger to controversy.
READ ALSO: Norwegian artist's 'racist chair' causes a stir
His work Chair, fashioned from a mannequin of a black woman bound up with bondage equipment, caused a sensation when Dasha Zhukova, the art collector then married to the Russian oil billionaire Roman Abramovich was photographed for a magazine article sitting on it in 2014.
He has used photographs of pedophile pornography featuring half-naked boys in his art, and argues he has no ethical responsibility for what his art displays.
READ ALSO: Bad-boy artist Melgaard's Munch pairing 'unworthy'
Url copied to clipboard!