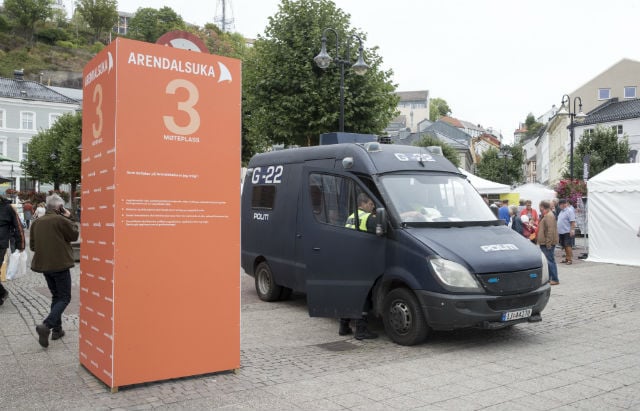 There has been a heavy police presence throughout the Arendalsuka festival. Photo: Terje Pedersen
Police said some of those arrested had been in possession of pepper spray, and had been actively discussing causing violent acts at the festival online.
“The persons arrested are connected to environments that via social media have called for extensive disturbances and violent acts during Arendalsuka,” said Morten Sjustøl from the Agder police. “With these arrests, the police believe that we are preventing major disruption to the event.”
According to the website Filter Nyheter, the six included Kenneth Fuglemsmo, leader of the communist group Tjen Folket. The Dagbladet newspaper said messages had been sent out to activists encouraging them to disrupt the political festival.
“Stop them, confront them, make this week an unpleasant experience for them!” one message read. “Be creative people! Dress up, have extra clothes, take care of the fascist groups and don’t get taken! We encourage many and varied actions.”
The radical rightwing group Alliance held an event in the centre of Arendal on Thursday afternoon, which was heavily surveilled by both uniformed and plain-clothes officers.
None of the expected counter-demonstrators materialised, however.
Url copied to clipboard!