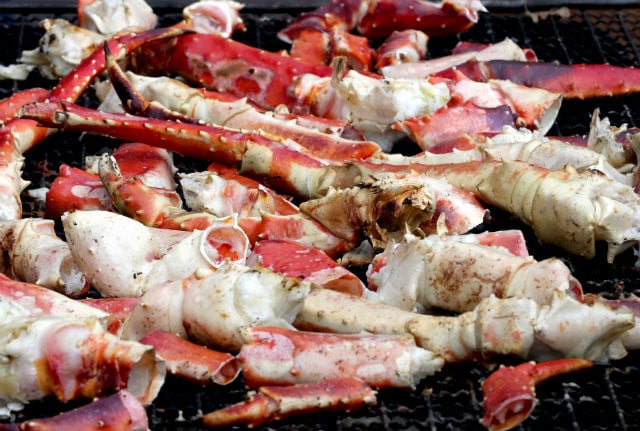 King crab on the barbecue. Photo: Vidar Ruud / NTB scanpix
The crab, which invaded Norwegian waters in the 1990s and 2000s, now sells in the centre of major Norwegian cities for close to 1000 kroner a kilo.
“We believe the volume is significant and perhaps increasing,” Ton-Ola Rudi, Senior Advisor at Norway's fishing ministry, told state broadcaster NRK of the illegal catches and sales.
Industry trade body Seafood Norway estimates that hundreds of tons of the succulent delicacy are being caught this year in excess of the 2018 quota of 1,850 tonnes.
The illegal fishing comes as Norway is exporting record quantities of live crab to meet soaring demand and benefit from record prices in markets such as South Korea, the US, and Japan.
In autumn, Norway's biggest illegal crab trading case so far will go to court, when a former chief executive of Snefjord King Crab in Masøy goes up in front of Finnmark District Court accused of  buying 23 tons of crab without the necessary documentation.
Thomas Darell, the police lawyer running the prosecution says the case is the biggest yet, but predicts there will be more to come so long as quotas full so far short of demand.
“It will make for lucrative fishing so long as we continue to see that the market wants loads of crabs,” he said. “When the fishing quotas fail to meet demand, we will get a market for those willing sell crabs that go outside the usual sales channels.”
Rudi said the illegal fishing risked damaging king crab stocks, doing long-lasting damage to the fishing industry, and hurting the 660 vessels which are allowed to fish the crabs under quota.
“Many settlements and fjord areas are and will be dependent on the capture of king crabs in the future,”  he said.
Url copied to clipboard!