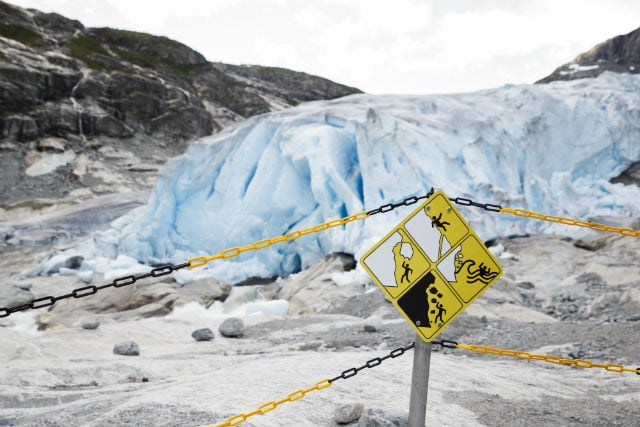 The man was one of a group of over ten who had ignored warning signs and crossed over a safety cordon to get closer to the glacier.

Three were thrown into the water by the ice,  two of whom managed to get to the rocks, where they were pulled back on land.

But the Austrian was left floating in the water while the rescue team waited for a helicopter to arrive.

“The team could not get out to him. They did not have any equipment, and it is very cold in the water,” Helge Blindheim of the Vest Police District told state broadcaster NRK. “The glacier had just calved and it was too dangerous to go there.”

When the helicopter fished out the man's body and brought him to land, he was confirmed dead on the spot.

Anne Rudsengen from the Norwegian Conservation Authority said she was not surprised by the accident.

“There are a lot of people who come here, and more who do not respect the barriers and so end up putting themselves at risk,” she said.

One of the two who managed to get to land also suffered head injuries, after being hit by a fragment of ice, Blindheim said.

Steinar Bruheim, leader of the guides’ association in the glacier area of Sogn og Fjordane, said other tourists had narrowly escaped similar accidents earlier in the summer, after the unusually hot temperature made the front of the glacier unstable.

“We have seen earlier that it’s been pure luck that some people have escaped been caught by the glacier when it breaks up,” he told NRK.

He said there was so much melt water this year that the current in the stream was extremely strong, so he said he believed the two survivors had been lucky to get out of the water onto land.

Bruheim said that throughout the year he and other guides have warned tourists away from the more unstable side of the glacier but without having much impact.

“We try to wave and yell that they should go back, but they just wave back,” he  said. “There’s not much more we can do.”

According to NRK, Nigardsbreen has been melting at a rate of 10cm a day, losing 8m of its length since May.