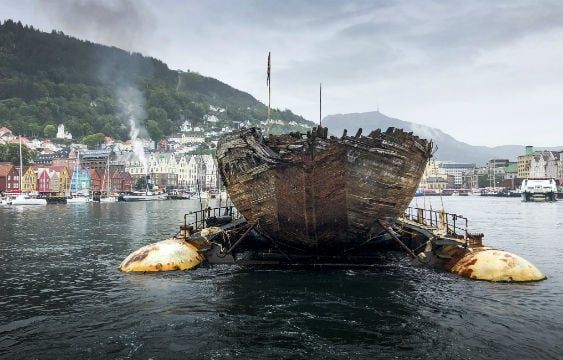 Maud is towed into the port of Bergen on Monday. Photo: Jan Wangaard/NTB

The wreck of Maud was dragged into the docks in the city of Bergen on Monday morning after a month-and-a-half-long journey across the Atlantic from the harbour in Greenland where it has been resting since it was raised two years ago.

“It feels absolutely fantastic to know that Maud is finally back in Norway after nearly 100 years,” said Jan Wangaard, who led the “Maud returns home” project. “It brings joy to our hearts to see Maud, still proud after all these years, see her old homeland once again.” Both of Amundsen’s other two polar vessels, Gjoa and Fram, are on display at the Norwegian Maritime Museum is Oslo. The people behind the project plan to restore Maud and display the vessel at a new museum at Vollen, the port in Asker where it was built.

Amundsen launched Maud in June 1916, by which time he had become a national hero in Norway and a celebrity internationally for leading the first expedition to reach the South Pole in 1911, beating Captain Robert Scott and his team by five weeks.


But after six years trying and failing to reach the Pole in the vessel, Amundsen instead sailed the North East passage, arriving in Nome, Alaska, where the ship was sold to the Hudson's Bay Company by Amundsen’s creditors.

The Hudson's Bay Company, then involved primarily in fur-trading, used Maud as a vessel supply its outpost at Cambridge Bay on Canada’s Northeast Coast.


In 1990, the company, by then a retail conglomerate, sold the half-submerged wreckage of the vessel to the Norwegian County of Asker, on the understanding that it be returned to Vollen.

But it was not until 2016 that the vessel was raised and moved to Greenland, and not until this June that it finally left for Norway.

Maud will now be towed along the Norwegian coast arriving on 18 August at Vollen.