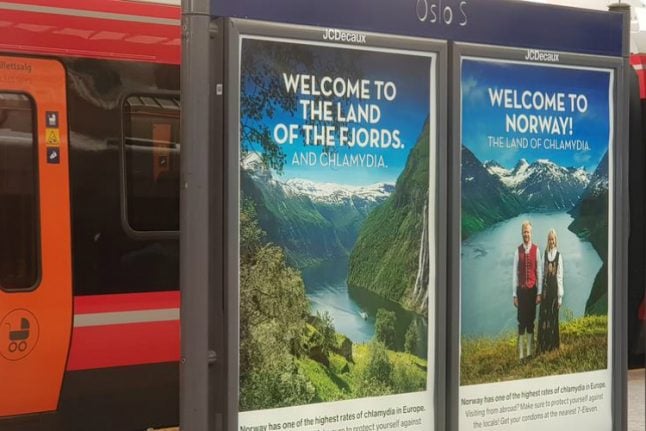 The 'chlamydia' advert can be seen at Oslo Central Station, amongst other places. Photo: The Local

“Welcome to Norway! The Land of Chlamydia”, pronounces the poster, which shows a young Norwegian couple dressed in the traditional bunad costume in front of a backdrop of snow-capped mountains and fjords.

Visit Norway, the country’s tourist board, has hit out at the ad for depicting Norway in a negative light.

“This is not a good advert for Norway, and as a depiction of Norway and Norwegians it is a disaster,” he added.

The poster advertisement is currently displayed at Oslo Central Station, making it likely to be one of the first sights to greet tourists upon arrival in the Scandinavian country.

Follestad said that Norway’s own health authorities should run a similar campaign themselves.

“I think this conveys an important message in an unjudgmental way, and it will be noticed,” he told Dagbladet.

The claim as to the prevalence of chlamydia in Norway made by the campaign is also an accurate one, he added.

“In 2016, over 26,000 cases of chlamydia were diagnosed in Norway and Norwegians are not good at using condoms. The consequences can be discomfort, irritation and in worst cases it can lead to reduced fertility. Furthermore, you can infect others and become more susceptible to other sexually transmitted diseases,” he told the newspaper.

“As with all slightly controversial campaigns, there have been both positive and negative reactions. So far, we have seen both types, which is expected when the aim is to get our young target audience to talk about the topic. It was not our intention to offend anyone with this campaign but we do want to create engagement and awareness around this topic,” Kjendlie said to Dagbladet.