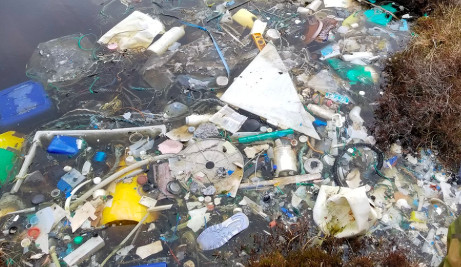 Some of the plastic pollution on Lyngøyne. Photo: Afroz Shah/Twitter
UN environment campaigner Afroz Shah has been “completely shocked” at Lisla Lyngøyne,  which has been dubbed “skrekkøya” or “horror island” by a Norwegian conservationist for the mountain of plastic waste surrounding it.
“I do not have any words to describe how I feel,” Shah told Norwegian broadcaster NRK on a visit to the island in Øygarden, outside Bergen. “I never expected to see anything like this in scenic Norway.”
Shah, a lawyer and environment activist, was made a UN Champion of the Earth in 2016 for his work organising the cleanup of the plastic strewn Versova Beach in his home city of Mumbai, and now travels around the world raising awareness of plastic waste.
He told his 24,000 Twitter followers that the islands off Norway's coast are “inundated with plastic”.

This weeks cleanup begins in Norway .

Kenneth , Runne and team are fabulous in handling the problem of plastic in ocean .

Pristine and remote islands in Norway are inundated with plastic .

We do our bit in Norway by cleaning the beach . pic.twitter.com/JnxLwwiNBT

“I'm completely shocked to see all this on an empty island,” he told NRK. “People can turn their backs or move somewhere else if they want. But what about the animals who live here?”.
Kenneth Bruvik from the Norwegian Hunting and Fishing Association, christened the island “Horror Island” after visiting it earlier this month, claiming it had the worst plastic pollution he had yet seen in Norway.
“”It is clear that a lot of it is local waste,” Marte Haave, from Uni Research Environment, which is owned by three local universities. “But a lot of it is also from the Netherlands, England and Iceland. This is a so-called ‘hot spot’”.
Shah believes it is time to give as much priority to plastic pollution as to greenhouse gas emissions.
“There’s no point waiting for legislation or the authorities. It’s not the authorities who have done this. It’s an ordinar uperson who has decided to throw this away,” he said.
“The sea and islands here belong to Norway and Norwegians. It's an enormous problem, but it's not inpossible to solve. But don’t wait for the regulation or the government. Go ahead and take responsibility.”
Url copied to clipboard!