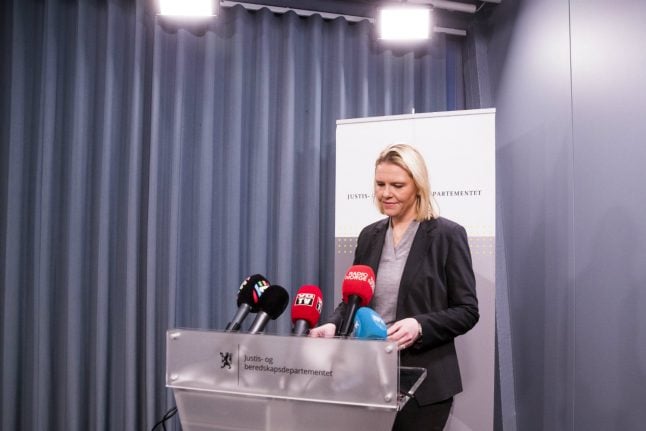 Parliament had been set to vote on the motion of no confidence on Tuesday.

But the minister pre-empted the vote by announcing her resignation early Tuesday morning, stating she could not allow the Progress Party to lose power over her departure.

Listhaug is a high-profile figure in the anti-immigration party, which is part of Norway’s tripartite coalition government.

Prime Minister Erna Solberg earlier said that if there was a majority against Listhaug, she would call a vote of confidence (kabinettsspørsmål in Norwegian) in the entire government, potentially resulting in new elections or either Solberg or Jonas Gahr Støre, the head of the opposition, being asked to form a new government.

The minister said her resignation was made on her own initiative. The decision is reported by state broadcaster NRK to have come as a surprise to both Solberg and Progress Party leader Siv Jensen.

“I appreciate that Siv and the entire [Progress] party were prepared to prepared to set aside our position as a government partner to support me as justice minister. But I cannot allow my departure to result in the Progress Party losing power and influence,” Listhaug wrote in a statement, which was also posted on her Facebook page.

She is reported to have given no indication on Monday to government or Progress Party leadership of her intention to resign.

“It was entirely up to me whether to see this through to the end or to step down,” she wrote.

The minister's resignation is the culmination of political and public outcry over an image and message posted by Listhaug on Facebook.

In the March 9th social media post, which contained a photo of al-Shabaab militants, she accused Labour of considering that “the rights of terrorists are more important than the security of the nation”.

Labour members were the main victims of the deadliest attacks on Norwegian soil since the Second World War when, on July 22nd, 2011, Anders Breivik, who once was a member of the Progress Party, killed 77 people in twin attacks: one targeting then Labour prime minister Jens Stoltenberg's office in Oslo and another against a Labour youth camp on the island of Utøya.

In the message confirming her resignation, the minister wrote that her post “was nothing to do with July 22nd” and claimed the subsequent outrage was a “witch-hunt”.

“I have found this to be nothing but a witch-hunt, in which Jonas Gahr Støre’s intention was to connect freedom of speech to an issue which is one of the most important things we must discuss for Norway’s future,” she wrote.

“The most important thing for me is the Progress Party and that it will continue to govern Norway,” she said at a press conference Tuesday according to NRK’s report.

She also reiterated her criticism at Tuesday’s press meeting of Støre for connecting her Facebook post to the July 22nd attacks.

“The aim of the [2017] election campaign was to keep Jonas Gahr Støre away from the Prime Minister’s office, and that is still my goal. I don’t think he is suitable for the role of Prime Minister of Norway. I am happy that Siv [Jensen] and the rest of the party have supported me 100 percent. They were willing to see this through,” she said.

“Støre has tried to label me, compare me with the views of Norway’s worst mass murderer. I strongly reject that,” she said.

Listhaug confirmed that she will continue as an MP and “concentrate one hundred percent on promoting Progress’ politics with my excellent parliamentary colleagues.”

Listhaug’s decision comes after the Christian Democrats on Monday refused to back her over the controversial Facebook post.

Although Listhaug eventually removed the post and apologised in parliament, a motion of no confidence against her gained the support of all parties in Norway's opposition, leaving her fate as justice minister potentially in the hands of the one remaining non-coalition party, the centre-right Christian Democrats.

Both Labour and the Centre Party are reported to have decided to move against Listhaug after seeing the way the apology was made.

She was asked for an apology on eight occasions and came to the speaker's stand four times during the session on Thursday last week.

The Facebook post announcing her resignation was published at 8am on Tuesday, just two hours before the no confidence motion was set to be voted in parliament.

After a long meeting Monday, the Christian Democrats concluded that they no longer could support Listhaug as justice minister, furthering the possibility of the government crisis, although they did not give a final confirmation as to how they would vote on the no-confidence motion.

The party’s votes would have determined whether the motion gained a majority.

On Monday evening, the three government parties – the Progress Party, Solberg’s Conservatives and the Liberal party – held crisis talks at the prime minister’s residence. Neither Solberg nor Jensen are thought to have asked Listhaug to step down, NRK reports.

At Tuesday’s press conference, she called the Christian Democrats a party “without a backbone, leadership or a way forward”. 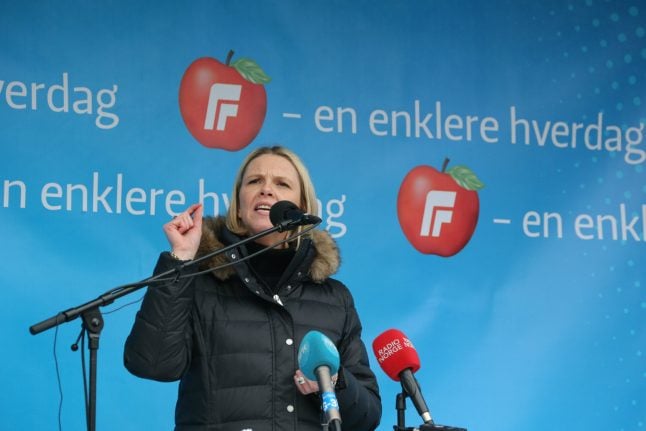