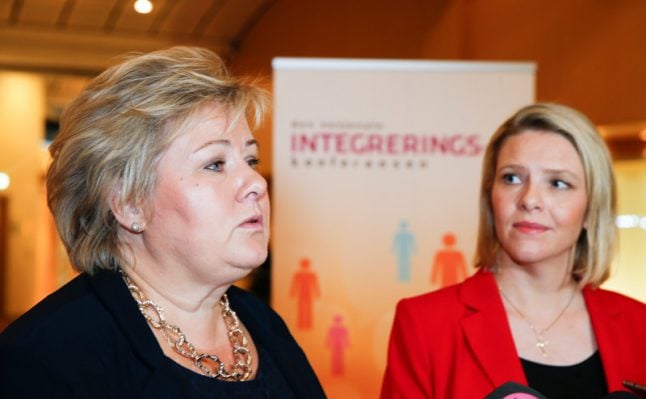 PM Erna Solberg (left) may step down if Sylvi Listhaug (right) loses a confidence vote. Photo: Terje Pedersen / NTB scanpix
In a Facebook post on March 9, Sylvi Listhaug, a member of the populist and anti-immigration Progress Party (FrP), had accused the opposition Labour Party of considering “the rights of terrorists (to be) more important than the security of the nation”.
The post, which contained a photo showing Al-Shabab militants, sparked uproar because Labour members had been targeted in 2011 in the worst attack on Norwegian soil since the end of World War 2.
On July 22 that year, right-wing extremist Anders Behring Breivik, who once was a member of the FrP, killed 77 people in twin attacks: one targeting then Labour prime minister Jens Stoltenberg's office in Oslo and another against a Labour youth camp on the island of Utøya.
Parliament is likely to go ahead with the no-confidence vote in Listhaug on Tuesday. Any vote could put Norway's minority administration in a bind because its centrists, who have always been critical of Listhaug, would be forced to pick a side.
Much may rest on the Christian Democratic Party — which is not part of the government but largely supports its motions despite frequent disputes with Listhaug.
Public radio and the daily Verdens Gang on Sunday reported that Conservative Prime Minister Erna Solberg would step down were Listhaug to lose the confidence vote.
“The prime minister will comment on the issue in parliament,” her office told AFP.