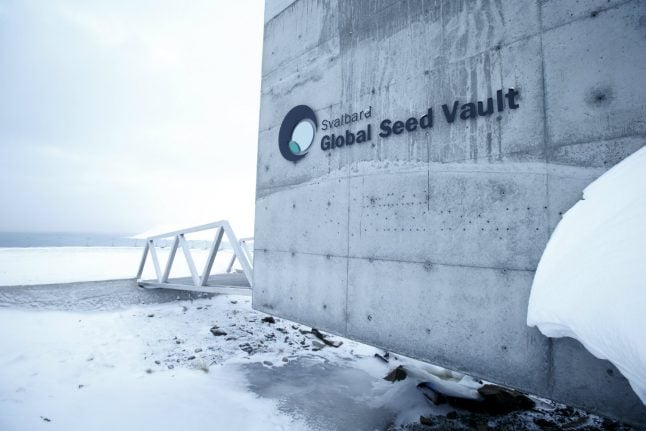 Dubbed the “Noah's Ark” of food crops, the Global Seed Vault is buried inside a former coal mine on Svalbard, a remote Arctic island in a Norwegian archipelago around 1,000 kilometres from the North Pole.

Opened in 2008, the seed bank plays a key role in preserving the world's genetic diversity: it is home to more than a million varieties of seeds, offering a safety net in case of natural catastrophe, war, climate change, disease or manmade disasters.

But warmer temperatures have disrupted the environment around the vault. In an unexpected development, the permafrost, which was meant to help keep the temperature inside the vault at a constant -18 Celsius, melted in 2016.

“The summer season was (warmer) than expected. We had water intrusions in the (access) tunnel that could be related to climate change,” Åsmund Asdal, one of the seed bank's coordinators, told AFP.

The Arctic is warming twice as fast as the rest of the planet, scientific studies show. And while Europe is at the moment experiencing a sub-zero cold spell, the North Pole recently registered above-zero temperatures, 30 degrees higher than normal.

Scientists say warm spells like this are occurring with increasing frequency in the Arctic.

Norway recently announced it would contribute 100 million kroner (10 million euros) to improve the repository in a bid to protect the precious seeds.

“We want to be sure that the seed vault will be cold throughout the whole year, even if the temperature continues to increase in Svalbard,” Norway's Agriculture Minister Jon Georg Dale told AFP.

The vault's raison d'etre was recently highlighted by the war in Syria, when scientists were able to withdraw seeds after a seed bank in Aleppo was destroyed in a bombing.

To access the heart of the vault where the seeds are stored, authorised visitors must first pass through heavy doors and a concrete, 120-metre (393-foot) tunnel, giving the chilling impression of delving into an Arctic abyss.

The tunnel leads to three cold chambers protected by locked gates. Inside each one, seeds from all over the world are stored in sealed plastic boxes labelled with the country of origin and the variety.

Outside, nothing betrays the presence of the storage site so vital to humanity, apart from a monumental entrance: the narrow cement-and-steel rectangular portal juts out of the snow-covered mountainside, illuminated with artwork made of mirrors and bits of metal that create a colourful prism visible for miles around.

On the mountain, workers' cabins dot the slope amid construction cranes and machinery, soiling the otherwise pristine white landscape.

Renovations to shore up the fortress are already under way. The improvements will enable it to “handle the climate for the next decades”, said Dale.

The access tunnel will be reinforced, and a cabin will be built near the site to house the technical materials that can generate heat — to prevent a recurrence of melting permafrost.

At the foot of the mountain, the fjord's swirling waters are a worrying indication of the state of the climate, according to Marie Haga of the Global Crop Diversity Trust, one of the seed vault's three partners alongside Nordic gene bank NordGen and the Norwegian government.

“When I came after 1985, the fjord was completely frozen,” she recalled.