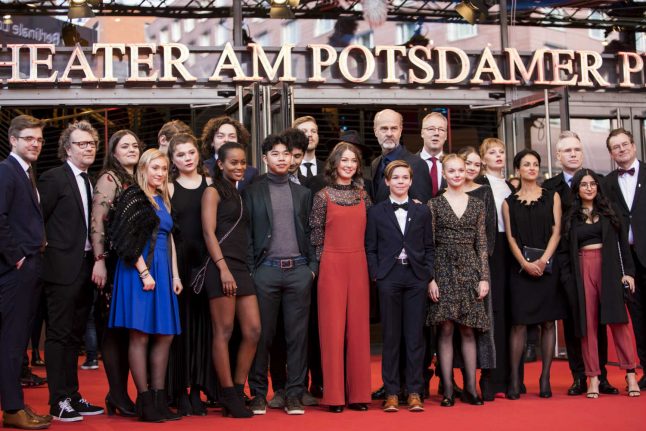 Director Erik Poppe and the cast of 'U - July 22' at the Berlin International Film Festival. Photo: Tore Meek / NTB scanpix

“U – July 22” traces the horror of Breivik's deadly attack on a Norwegian Labour Party Youth League camp on the island of Utøya, in which 69 people were killed.

The Norwegian movie, filmed in a single take, traces all 72 minutes of the teenagers' struggle for survival as they waited for police to arrive.

The premiere comes just days after one of the worst school shootings in US history, killing 17 in Florida.

Norwegian director Erik Poppe said that in the seven years since the tragedy, Breivik had repeatedly stolen the spotlight with extravagant court appearances and blanket media coverage, eclipsing the memory of the nation's dead children.

“As we went on month-by-month, year-by-year, we saw the memory of what took place out on that island faded more and more,” Poppe, a former war photographer, told reporters after a press preview.

“I was meeting survivors from that island. They shared that feeling… and this was worrying them.”

Breivik, disguised as a police officer, tracked and murdered 69 people, most of them teenagers, on Utøya, shortly after killing eight people in a bombing outside a government building in Oslo.

He has never expressed any remorse for committing the worst atrocity in Norway's post-war history and said he killed his victims because they embraced multiculturalism.

The film's production team took the testimony of several survivors to create a fictionalised but painfully realistic account, with a cast of mainly lay actors.

The movie focuses on a handful of teen protagonists, in particular the sisters Kaja and Emilie, who are separated as the first gunshots ring out.

Andrea Berntzen, who plays Kaja, said she was just 12 at the time of the attack and had few specific memories of that day apart from “being scared”.

“Hearing about this movie, at first I was very critical because I thought it was too early, like many in Norway,” she said.

“But reading the script and learning that the focus would be on the youth on the island rather than the man behind this was really important to me.”

Some survivors in Norway have strongly criticised the decision to make the film.

“Erik Poppe took the worst nightmare of my life and turned it into entertainment,” said Kent Rune Pedersen, who escaped Utøya with his life, adding he was still haunted by “flashbacks, dreams, noise, cries and images”.

“It is out of the question that I would go to the cinema to watch such a film,” he told AFP.

Poppe said showing a highly emotional dramatisation of events was intended to have a “healing” effect for survivors, victims' families and a traumatised country.

But he said his motivation to shoot the harrowing scenes of youth being cut down in their prime was also political.

“Looking around Europe, neo-fascism is rising day by day, we need to remember what happened out on that island, what neo-fascism can look like,” he said.

The keenly awaited movie is one of 19 pictures vying for the Golden Bear top prize at the Berlin film festival, to be awarded on Saturday.

British director Paul Greengrass, who won the Golden Bear in 2002 for “Bloody Sunday”, is reportedly making his own film about the massacre for Netflix, “Norway”.