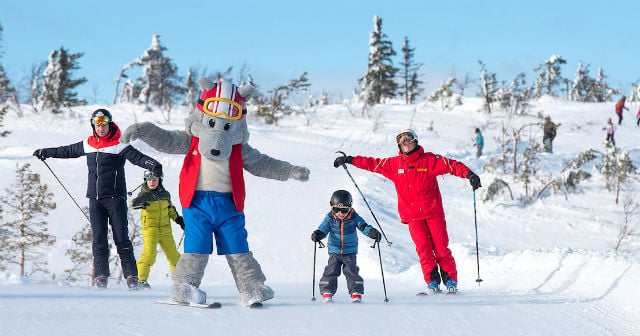 Busy kids are happy kids. But keeping the youngest family members occupied is a full-time job in itself! Especially if your horde is made up of all different ages.

And come vacation time it’s not just the juniors that need some time off. Right, parents?

Herein lies the challenge. Finding a ski resort that has as much for adults as children is like finding the proverbial needle in a haystack.

That is, unless you already know about Stöten ski resort hidden away in the Sälen mountain range in west Sweden.

It’s around 450 km from Stockholm and 500 km from Gothenburg — far enough to feel remote while still being easy to get to directly on the Fjällpressenexpress service from Stockholm, Gothenburg, or Malmö.

With its sprawling views of the Swedish and Norwegian mountains, slopes for all levels, and activities for people of all ages — Stöten is hands-down Sweden’s most family-friendly ski resort.

Stöten has slopes for skiers of all ages.

Just ask father-of-two Niklas Lundgren, who bought a cabin there in 2015.

He’d first visited the resort as a child, but it wasn’t until he had his own family that a friend reminded him of Stöten. The timing couldn’t have been more perfect, as he’d been in the market for a property in the area.

“My wife had been looking for a cabin for quite sometime before our friends recommended us to look at Stöten,” Niklas recalls.

He admits he hadn’t thought much about Stöten previously; however, after booking an appointment with an estate agent, the couple knew immediately it was the resort for them.

“My wife and I decided then and there to go for it. And we have absolutely no regrets,” he says.

Niklas now visits each year along with his wife, his 9-year-old son Carl, and his 13-year-old daughter Thea.

“I don’t remember much about coming here as a child. But I don’t think I’ll ever forget what it was like when I arrived here with my own family. The feeling of getting up on the mountain; the fantastic nature; the long and steep runs — it was fantastic!”

The Lundgrens are one of four families that meet at the resort often throughout the season. The kids have all made fast friends, and have even created their own Instagram hashtag to use to keep in touch.

“They use it to communicate with each other and keep track of which slopes they’re on, or decide where to meet up,” Niklas explains.

And there’s no shortage of places for the kids (and parents) to get together, even when they’ve put away the skis for the day.

Soak your muscles in an outdoor jacuzzi or splash about in the indoor waterpark at Vattufjäll activity house, head to the gym (a perk that’s included with the SkiPass+), or dance the night away in the disco.

By day, little ones as young as three years old are watched over by Vargy the friendly wolf, spending their days hunting for treasure and generally having a cracking good time. There’s also the wolf den, where they can do crafts, bake, or watch movies if they aren’t in the mood for hitting the slopes. Vargy’s also been known to throw a wicked après-ski (known in Sweden as “after-ski”) for the kids.

But don’t worry, parents. The after-ski isn’t reserved for the little ones.

After-ski at Stöten isn't just for the kids!

Parents can let their hair down at the after-ski in Brasseriet, which doubles as a restaurant that serves a delectable selection of dishes for all tastes (make sure to try the beef cheek). It’s just one of several restaurants and cafes on-site where guests can refuel after a day on the slopes.

But here’s where the deal becomes even sweeter. For ten weeks of the season, dubbed “Junior Weeks”, being a child up to six years old is totally free (provided they’re with a paying adult). That means everything from food, ski rental, ski school, Vargy’s wolf club activities and swimming at Vattufjäll water park is on the house.

Find out more about what’s included in the Junior Week offer right here and start planning this season’s ski trip at Sweden’s most family-friendly resort.

This article was produced by The Local Client Studio and sponsored by Stöten.