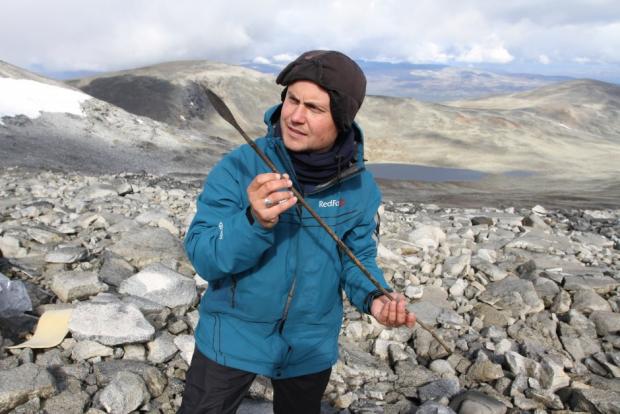 An archaeologist holds up an arrow, circa 1,400 years old, which was lost in a reindeer hunt in the mountains of Norway’s Oppland County. Photo: Julian Martinsen/secretsoftheice.com/Oppland County

Archaeological discoveries from a period known as Fimbulvinter – The Terrible Winter – have helped reveal how people in Norway survived these tough years, writes ScienceNordic.

A fierce cold period struck the Northern Hemisphere in the years from 536 AD to the 660s AD with no real summers. It became known as the Fimbulvinter – The Terrible Winter – and worked its way into Norse folklore.

Ten years ago archaeologists started systematically collecting artefacts that were turning up under Norwegian mountain glacial ice and perennial snow fields that have been frozen for as long as thousands of years. They have been surprised by the finds.

Archaeologist Lars Pilø, a glacial expert in Oppland County, has been involved in this new field of work in Norway from the start. Since 2007, he and his colleagues have conducted field work in the county's glacial areas every summer and collected objects that Norwegians' ancestors have lost or left behind, now turning up in and near the retreating fields of ancient snow and ice.

An ancient trail crossed the mountains at Lendbreen, one of the glaciers where Lars Pilø and colleagues have conducted fieldwork. This was a route between Sognafjord on the West Coast and Eastern Norway.

People travelled between Skjåk and Bøverdalen, with livestock and to summer mountain farms, or simply to get from one place to another. The scientists have found in the area mittens and skis, a horse skull and hiking staffs from the Viking Age.

Over 2,000 artefacts, many used in hunting, have been found in Oppland County alone, including arrows, bows, clothes, horse equipment and horse dung.

Pilø and some of his fellow researchers recently published a research article in the journal Royal Society Open Science, providing a summary of where they have found artefacts and how old 153 of them are.

The researchers used radiocarbon dating to draw a timeline for the artefacts, the most ancient being 6,000 years old. This has given them an idea of the periods in older Norwegian history in which people travelled and hunted in these mountains and perhaps why there was less human activity at these elevations at other times.

They were surprised by what they discovered from layers of snow and ice formed in period of climate change from 536 to about 660 AD, as extensive cold period known as the Late Antique Little Ice Age.

One might expect that traces of human activity high in the mountains would decrease during these decades of colder and harsher climate, as seen in other parts of Norway during this period. These were certainly hard times in Northern Europe and the population plunged. Yet this is not reflected in the quantities of artefacts testifying to hunting and other activities found by Pilø and colleagues in the Oppland County mountains.

The researcher was amazed to see signs of increased activity and thinks it could be the result of people adjusting to the climate as well as they could.

“What we need to remember is that those who lived in the North Gudbrandsdalen region then an up until modern times were not either farmers or hunters. They were both. Additionally, this is a rather marginal region for agriculture, so even small changes in climate tend to have quite an impact here,” Pilø said, speaking to ScienceNordic.

READ MORE from ScienceNordic: Houses reused for over 1000 years during Stone Age

“When people saw their agricultural yields declining, the solution was to hunt more. Maybe this is the readjustment we are seeing traces of now in the artefacts from the ice of that period. A comparable development is found regarding the Norse settlers on Greenland at this time. They started hunting more when the climate got colder.”

The architects also find traces of children's lives among the items from 6th century Norway. They discovered an arrow so small that it must have been used by a child who was also up in the mountains, possibly brought along to learn how the adults hunted reindeer.

The arrow is just 26 centimetres long, and the archaeologists have contacted experts who are sure this was a play arrow.

“It was just for practicing. Hunting must have been a crucial thing for kids to learn in this period,” Pilø said.

He was delighted to find something related to children, as this provides a closer look into the lives of these ancestral Norwegians.

“This was a tough time to live. Perhaps a child was practicing and lost the arrow. The child would have been very unhappy about its disappearance. But it didn't vanish. The ice preserved it for 1,400 years,” he said.

READ MORE from ScienceNordic: Pope said “no thanks” to Norwegian coins

Many finds because of larger glaciers?

University of Tromsø Paleo-ecologist, Per Sjögren, is a specialist in searching for signs of ancient life and has found traces of the so-called Fimbulvinter of the 6th century by analysing changes in the cultural landscape of the Norwegian mountains.

He too is taken aback by Pilø's and fellow researchers' discoveries of increased human activities during the Late Antique Little Ice Age at high altitudes in the 500s and 600s.

“Yes, we know that agricultural activities decreased in the mountain areas, and with a highly probable decline in population and no other evidence, I would have expected all activity in the mountain areas to have been reduced too,” he writes in an e-mail to ScienceNordic's Norwegian partner, forskning.no.

He likes the hypothesis that people relied more on hunting when their crops took a beating because of the cooler climate.

But Sjögren points out that glaciers expanded in this period and this has an effect on where archaeologists find artefacts and how well they are preserved.

Pilø says this is a natural consideration which is taken into account by the research publication.

“We do not see a pattern of more discoveries when the glaciers grow. One of the reasons for this is that most of the findings are from perennial patches of snow, not from glaciers, and these react in their own way to climate variations,” he said.

The researchers from Oppland County, the University of Oslo Museum of Cultural History and the University of Cambridge have attempted to place 153 artefacts on a timeline in their article. Pilø and colleagues explain this more in a video on their Facebook page Secrets of the Ice.

The researchers have also found considerably older items, including an arrow that melted out of the ice layers which has been dated at 3800-4000 BC. After that, there is a long hiatus of nearly 1,600 years where they find no artefacts preserved in the ice.

Prior to 4000 BC, the climate was warmer and there might have been little ice in the Oppland mountain region. Organic items people lost or intentionally left behind would not be preserved.

There is nevertheless a gap from 3800 to 2200 BC. The researchers reason that way up at the highest altitudes there could still be some artefacts from this period trapped in ice, but further down the slopes they could have melted out centuries ago and thus lost.

Then things start turning up again – the researchers found objects from after 300 AD and then from the cold climate period two to three centuries later.

Many artefacts were found from 700-900 AD, just prior to and during the Viking Age.

“This was because of an increase in trade,” says Pilø. Hunting and trapping products, such as hides and antlers, found a market outside the region.

Pilø says that one might expect finds of artefacts from hunting to increase all the more during the Middle Ages, but they don't.

“On the contrary, the quantity of artefact discoveries drops off. We think the reindeer population was almost wiped out during the Middle Ages. People had started using mass trapping techniques which were unsustainable.”

In an article in forskning.no from 2014, Pilø said it was thrilling to find everything from hunting tools to daily life articles like mittens and shoes, bones from horses that died on the trail across the mountains in the distant past. But the sweet discoveries could be said to have a bitter aftertaste in times of concern about global warming.

“The artefacts can give us new knowledge about people who have lived here since the Stone Age. This is undeniably exciting. At the same time, the material is turning up so fast from melting snow and ice that archaeologists need to work as fast as they can to save and conserve them as well as nature has done up until now,” said Pilø to forskning.no four years ago. 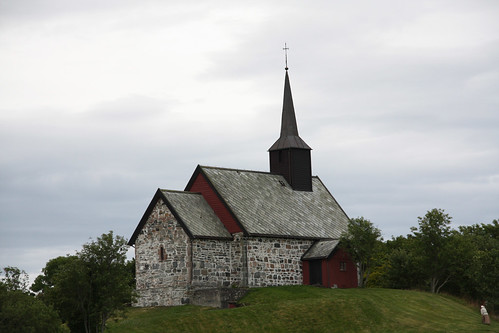 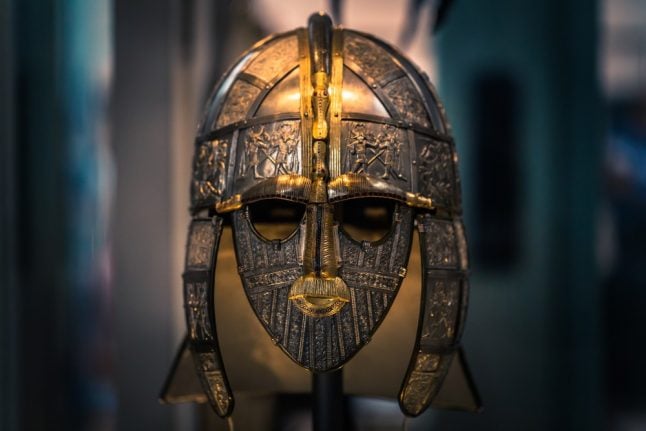 ARCHAEOLOGY
The Anglo-Saxons were more menacing than the Vikings, and the English language can prove it

The vessel, which could also date from the pre-Viking era, was discovered in the western Møre and Romsdal county, NRK reports.

Climate minister Ola Elvestuen told the broadcaster that the discovery was of “both national and international significance”.

Archaeologists from the Norwegian Institute for Cultural Heritage Research (NIKU) uncovered traces of the ship on the island of Edøy.

A high-resolution georadar “detected traces of a ship burial and a settlement that probably dates to the Merovingian or Viking Period at Edøy,” NIKU writes on its website.

Edøy is located on the shipping lane to Trondheim, close to where early king Harald Fairhair is said to have fought two sea battles, winning royal power in Norway in the late 800s.

A high-resolution georadar has detected traces of a ship burial and a settlement that probably dates to the Merovingian or Viking Period at Edøy in Møre and Romsdal County in Norway. https://t.co/O8qsAsg2XK

“This is incredibly exciting. And again, it’s the technology that helps us find yet another ship. As the technology is making leaps forward, we are learning more and more about our past,” Knut Paasche, head of the Department of Digital Archaeology at NIKU and an expert on Viking ships, said via the institute’s website.

“It is too early to say something certain about the date of the ship, but we know that it is more than 1,000 years old,” Paasche told NRK.

Tove-Lise Torve, head of the Møre and Romsdal county administration, expressed her excitement about the discovery, which she did not happen by “chance”.

“This is not a chance discovery, but a result of systematic work,” Torve said via press release, in reference to a county-funded research and development project.

“Edøy is one of the key sites along the coastal pilgrimage trail, and we have planned to establish a regional coastal pilgrimage centre here for our county and (neighbouring county) Trøndelag. This discovery tells us that we have chosen the right place,” she added.

The remains of the ship are located just below the topsoil in an area where there was previously a burial mound, the institute writes on its website.

“The length of the keel indicates that the ship may have been a total of 16-17 meters long,” Paasche said.

In addition to the ship, the archaeologists also noted traces of settlements in the data, but are so-far yet to date these.

The georadar surveys at Edøy were conducted as a collaboration between Møre and Romsdal County, the local municipality Smøla, and NIKU. 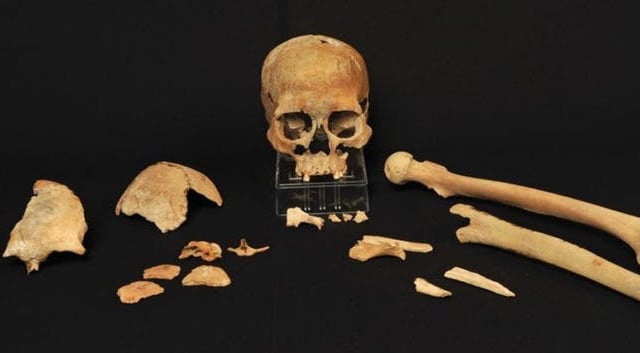 ARCHAEOLOGY
Who were the first Scandinavians? Ancient DNA sheds light on mysterious origins 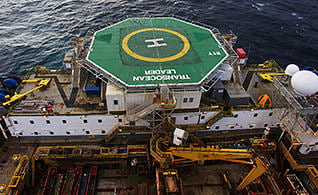