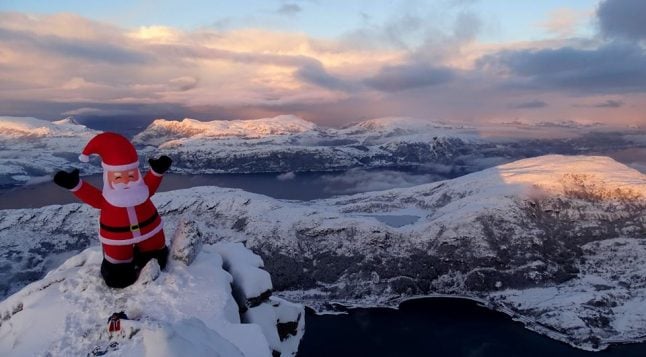 The 860-metre Hornelen, which forms the eastern tip of the Bremangerlandet island in Sogn og Fordane county, is considered Europe’s highest sea cliff.

Formerly used as a point of navigation for passing ships, anyone taking a close look at the clifftop on Saturday will have seen a surprising seasonal visitor: a giant inflatable Santa.

“We are tired and have certainly worked to get that Santa to the top,” Jan Fredrik Fosse, one of four trekkers who hauled the Father Christmas to the peak, told broadcaster NRK. The feat is the culmination of a challenge made to the group by a friend of Fosse’s after the Santa was secretly inflated in front of his house.

The friend, Harry Gulestøl, became the target of the group’s prank given his usual reticence to decorate his house with conspicuous Christmas decorations, newspaper VG reported earlier this month.

“We’ll have to think of how to get them back. They can’t do this without getting anything back,” Gulestøl told VG at the time.

That revenge turned into a challenge: carry Santa to the top of Hornelet – without using a sleigh.

“I thought that this challenge would get the Santa out and about, and would also give my friends a great Christmas card picture,” Gulestøl told the newspaper.

As well as the outsized air Santa, the group also carried a motorcycle battery, several air pumps and a Norwegian flag up the slopes of the island to complete the stunt.

The group reached the top at around 2pm on Saturday.

“We had to accept the challenge. It turned into quite the trip,” Fosse told VG.

Gulestøl was happy to see the Santa returned to his front yard, according to Fosse.

“He was certainly terrified it would be damaged during the trip. Now it is standing safely in his yard again, so we’ll see whether there are any more expeditions before Christmas. Now we are quits, but you never know whether there’ll be a new Santa expedition,” he told VG. READ ALSO: World's biggest pooping marzipan pig? It must be Christmas in Norway