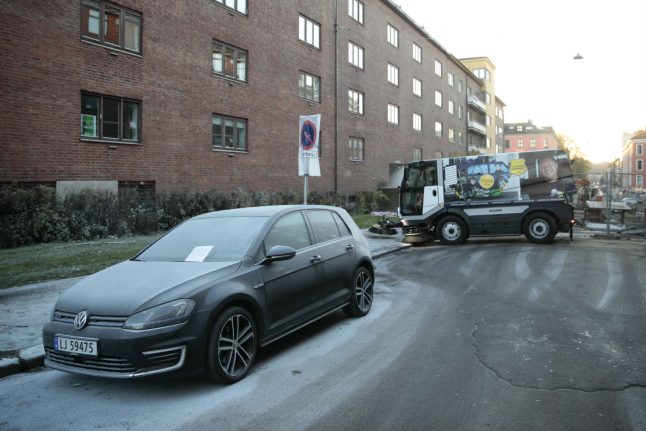 The pair sprayed 22 cars with nine different extinguishers during the course of the night, reports newspaper VG.

“Our response team leader encountered them around 4:15am and they ran away when they saw us. We initially thought there may have been a fire or similar, because there was so much powder. With the aid of a dog patrol we were able to detain them shortly afterwards,” operation leader Steinar Hausvik told VG.

The incident occurred in the Hans Barliens gate street in the centre of the Norwegian capital.

“It is not a good idea to start the cars at the moment, as the powder can get into the engine. According to the fire service they should also not be hosed down, as the powder can turn into a kind of sticky substance that can destroy the paintwork,” Hausvik added.

Police have left notes to the vehicle owners recommending them to contact their insurance companies and clean the cars thoroughly before starting them, reports VG.

Car owner Hajrije Hashani told broadcaster NRK that the vandalism of her vehicle made her “sad.”

“I’ve never seen anything like it. I’ll have to contact my insurance company straight away,” she said.

The two suspects have now been reported for serious vandalism and will be interviewed by police on Friday. Their motive is currently unknown.

“We do not know how they got hold of the fire extinguishers,” Hausvik told VG.