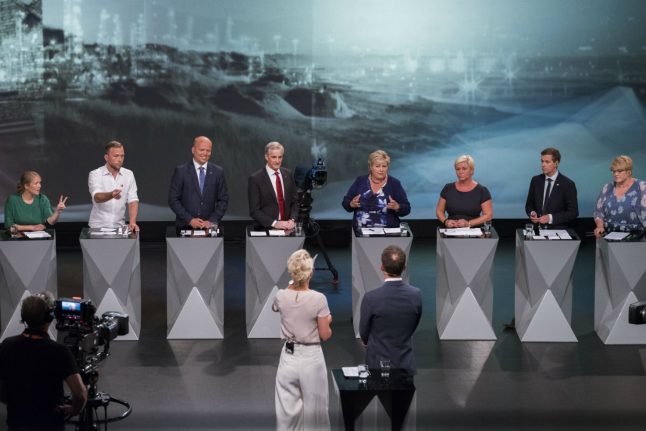 Background: Hailing from the southwestern city of Bergen, Prime Minister Erna Solberg has been in politics since serving as a deputy member on her home town’s city council in the late 1970s. She has a degree in Political Science from the University of Bergen, has been an MP since 1989 and leader of her party since 2004. Solberg has two children with husband Sindre Finnes, a businessman and former Conservative Party politician.

Party: Having been in opposition since 2005, the Conservatives obtained 26.8 percent of the vote in the 2013 election. They formed a centre-right coalition known with the nationalist Progress Party, with the Liberal Party and the Christian Democrats providing support on a confidence and supply basis. In December 2016, the coalition narrowly avoided collapse over budget negotiations.

The Conservatives are a traditional economic liberal party, with policies aligned with lower taxes and small government more in focus than social or religious conservatism. The party's popular support surged in 2013, up from 17.2 percent in 2009. Polls currently have the party at around 25 percent – not quite enough to guarantee re-election but gaining ground on the opposition Labour Party as election day gets nearer, with a recent poll making Solberg the narrow popular favourite for the leadership.

Background: Having served as both foreign minister and health minister under Jens Stoltenberg’s government, Støre took over as Labour leader when Stoltenberg left to take over as NATO general secretary. Born in Oslo, Støre, who studied at the London School of Economics and Paris-Sorbonne University, is a fluent French speaker. He is married to sociologist Marit Slagsvold, with whom he has three children.

Party: Labour won consecutive elections under Stoltenberg in 2005 and 2009, and even in losing the election in 2013 claimed over 30 percent of the popular vote and 55 of parliament’s 169 seats. The 30 percent barrier is a stated target of party leader Støre as he seeks to gain an overall majority for a new government.

A social democrat party in the classical Scandinavian mould, Labour has spent a large majority of the post-war years in government. If elected, Labour are likely to increase tax. Støre has also focused on the environment during the campaign, saying there “will not be a single climate denier” in a government led by him.

Although they have performed well in the polls throughout the year, recent estimates have them just missing the 30 percent target, leaving the overall outcome of the election on a knife edge.

Current role: Minister of Finance since 2013; Progress Party leader since 2006

Background: A career politician, Jensen has been a member of Norway’s nationalist party since 1988, having reportedly dabbled with socialist and conservative youth parties when at school. She took over leadership of the Progress Party in 2006 and has overseen the party’s development from populist outsider to coalition partner. Both Jensen and the Progress Party as a whole have maintained their strict anti-immigration view throughout.

Party: Founded in the 1970s, the Progress Party has increased its influence, like nationalist movements throughout much of Europe, during the 2000s and 2010s. Apart from Jensen, the party’s biggest profile is immigration minister Sylvi Listhaug, who has fought to keep numbers of asylum seekers entering the country low and most recently made the news for saying rejected asylum seekers should be detained in secure facilities.

Background: An economist and former political advisor, Knut Arild Hareide is credited with leading the Christian Democrats in a more liberal direction, leading to speculation that the party could end its parliamentary support for the Conservative-Progress coalition, particularly after a number of public spats with Listhaug.

Party: Essentially a socially conservative centre-right party, the Christian Democrats’ political platform is based on traditional Christian values. The party opposes abortion and gay marriage, although Hareide himself took part in Oslo Pride in 2016. The party also sees aid to developing countries and environmental issues as key areas.

Background: Minister of agriculture for the last year or so of Jens Stoltenberg’s Labour-led government, Vedum was previously active in the Centre Party’s youth wing, which he led for two years before being elected to parliament in 2005. He is said to be a keen dancer.

Party: A likely coalition partner with Labour should it win enough seats to get back into government, the Centre Party has its origins in the political movements started by farmers and fishermen in the 1920s – its original name is Bondepartiet (The Farmers’ or Peasants’ Party). In its modern form, the party has an agrarian centrist outlook, supports private ownership and decentralisation and is against Norwegian EU membership.

Background: A former teacher and journalist, Grande has been and MP since 2005. In 2015 she boycotted a parliament committee visit to Iran, calling the requirement for women to cover their hair discriminatory. She is perhaps better known, though, for being caught playing Pokemon Go during a parliamentary hearing in 2016.

Party: Centrist, socially liberal Venstre is Norway’s oldest party, having been founded in 1884. Its core values include supporting small businesses and education as well as the welfare state, and sometimes law and order. A leadership split in the 1970s left it with very little parliamentary representation, but a revival in the 1990s led to it gaining ten seats and entering coalition with the Conservatives and Christian Democrats in 2001.

Background: Lysbakken, like Solberg, hails from Bergen, where he participated in left wing anti-EU movements and was leader of SV’s youth wing during the late 1990s. He entered parliament as the representative for Hordaland in 2001 and served as Minister for Equality under Stoltenberg, although he was forced to resign from that post over a public funds misuse scandal.

Party: SV’s manifesto states that the party is fighting “to ensure all people are free and have equal opportunities”. Its socialist platform is broadly based on fighting climate change and discrimination, with individual business ownership and “an economy dominated by democratic ownership” also in focus. It is also against Norwegian EU and NATO membership.

The party is a likely part of the red-green alliance that would put Støre in place as prime minister, but has seen a gradual falling off in support since the turn of the century, from 12.5 percent of the popular vote in 2001 to 4.1 percent in 2013.

Background: The Green Party eschews the traditional party hierarchy with a leader and deputy leader, instead opting for an 11-person central committee with a man and a woman as joint spokespersons. Bastholm, who studied political science and has worked for Norwegian environmental NGOs; and Hansson, the party’s only MP, have held the positions since 2016.

Party: Founded in 1988, the Greens define themselves as unattached to red-blue coalition politics, saying they view the “grey-green” split as more important. Though they only have one seat in parliament, the Greens have representation in a number of Norway’s municipal governments and have a potentially significant influence on the outcome of the general election. The party supports organic agriculture, innovation, sustainable industry and animal welfare.