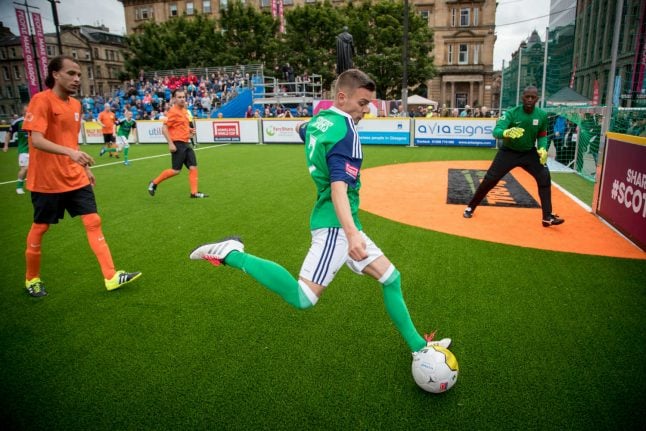 The 2017 competition looks set to become the largest of its kind in its history.

A record entry of 72 teams from 54 countries across the world will compete in the eight-day tournament, which kicks off at Oslo’s Rådhusplassen city square on August 29th.

Now in its 15th year, the competition will witness games involving 570 homeless men and women broadcast to a record estimated worldwide audience of more than three million.

The tournament uses football as a force for good to help people who are homeless transform their lives for the better, say its organisers.

As well as developing relationships and learning to trust in teammates, street football can also improve other aspects of a person’s life, such as self-esteem, physical health and well-being and relationships with friends and family, says Ryan Mackie, chief executive of the Homeless World Cup Foundation.

“Homelessness is a global issue which affects millions of people in different ways around the world. But thanks to football’s universal appeal and ability to bring people together, the Homeless World Cup Foundation has been a revelation in being able to break down personal barriers and change many people’s perceptions around homelessness,” Mackie said via press release.

“Football gives people who have previously felt alienated from society a real sense of responsibility and purpose to make positive changes to their lives and over the last 15 years the Homeless World Cup has helped thousands of people who are homeless to reconnect with employment, education and rehabilitation,” he continued.

94 per cent of players surveyed after that tournament said the event had a positive impact on their lives, while 84 per cent of spectators said they had a more positive attitude towards homeless people as a result of watching the tournament.

“On any given day the best a homeless person can expect from society a lot of the time is pity, and the Homeless World Cup is not about pity, it's not about shame, it's not about your head being down.

“The Homeless World Cup is about your head being up, it's about no apologies and, at the end of the day, it is about coming together through competition,” actor Colin Farrell, an official ambassador for the event, said via a press release.

There will be 72 teams participating in this year’s Homeless World Cup in Oslo, including current men’s and women’s world champions Mexico.

Games are four-a-side with four rolling substitutions allowed and are 14 minutes long, split in to two seven-minute halves.

Host nation Norway will meet former champions Brazil in the men’s/mixed competition and Chile in the women’s.

The tournament kicks off on Tuesday, August 29th with Norway vs. Chile, followed immediately by the match between Norway and Brazil.

More information on the Homeless World Cup and how to donate can be found here.