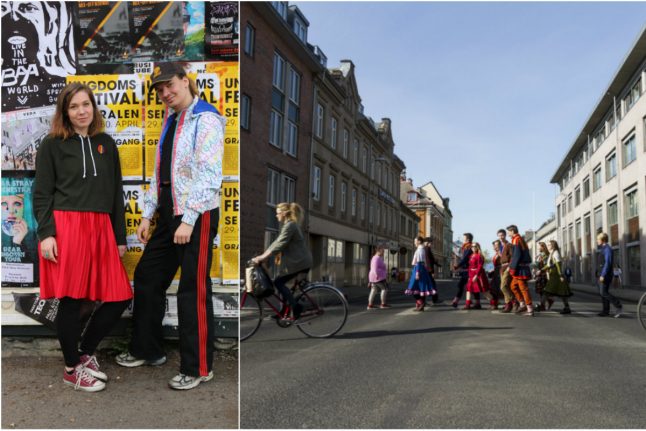 One of the most notable traditions is the traditional Sámi garment, gákti.

While young Sámis use gákti more often and casually than earlier, the exploitation of the Sámi traditions and culture continues.

“You can tell a lot about a car when you see the logo. In the same way, Sámis know a lot about another person based on their gákti. If the gákti is fake, it doesn’t say anything. It’s like someone wore a sheet and foolishly imagined that they look good. They don’t”, Niila Rahko explains.

Rahko is a Sámi born in Rovaniemi, the capital of North Finland. His father is Finnish and his mother is Sámi. During the harsh assimilation programmes of the 1960s and 1970s, she was forced to hide any indications of Sámi tradition.

“For decades, there has been a strong tendency to feel humiliated for being a Sámi. Now it’s starting to feel like it’s actually cool to be a Sámi. This is of course a great improvement”, Rahko says.

Although Sámi culture is becoming more known thanks to artists and activist groups like Suohpanterror and Maxida Märak, Rahko believes that more information is needed.

Schools teach little about Sámi culture, and thus the majority image of Sámis is filled with stereotypes instead of knowledge, he says.

READ ALSO: History of Norway’s indigenous Sami and Kven people to get inquiry

One common stereotype is that Sámis live only in the North, herd reindeer and joik.

But, Oslo, Stockholm, and Helsinki are all called the ‘biggest Sámi villages’.

The total Sámi population in the Nordics is estimated at approximately 80,000, of whom around half live in Norway.

While an increasing amount of especially young Sámis are moving to cities, the number of city Sámis is unknown.

Pulled and pushed around

One of the main reasons for Sámis to move into cities is urbanisation and policies that make traditional rural economic activities difficult to maintain.

According to researcher Mikkel Berg-Nordlie, opportunities for work and education are centralised to urban areas, both within the traditional indigenous lands and outside them.

Berg-Nordlie is a researcher at the NIBR Institute of Oslo and Akershus University College and the coordinator of a project on urban Sámi politics and identity. According to him, the urban areas also have a cultural pull that is seen as desirable, particularly by young people.

Many Sámi living in cities report that they face less racism there than in the rural areas they came from, and experience less negative feedback from others when expressing their Sámi identity and culture in public, according to Berg-Nordlie.

The big city’s call was heard by Dávvet Bruun-Solbakk, 21, and Alice Marie Johansen, 27, who both moved to Oslo to study.

Bruun-Solbakk and Johansen, who are both board members of Noereh, an organization for young Sámis, say that the city Sámis have a strong bond and strong community.

“Here in Oslo there are not many prejudices, but people do joik after us”, says Bruun-Solbakk.

Despite stereotypes and countless questions, Bruun-Solbakk and Johansen feel that a big city gives them good opportunities to express themselves. At Samisk Hus, a gathering place for young Sámis is Oslo, Noereh arranges disco nights, gigs and concerts.


A lot of young Sámis are finding their way back to their roots and many of them are doing it in the big cities. Photo: Marita K. Eilersten

Johansen says that Sámi youth culture has all the same things as the Norwegian culture but with Sámi elements, citing electronic music, hip-hop dance, and rap as genres in which Sámi cultural movements exist.

Bruun-Solbakk and Johansen wish that Norwegians would know more about city Sámis but also realise that their own community should be more inclusive. The 21-year-old says that being a part of a sexual minority inside an ethnic minority has often been difficult.

“The Sámi tradition is quite strict: everyone has to look and act the same. It is a difficult society, not only for queers but also for foreigners”, says Bruun-Solbakk.

A history of silence

Student Bruun-Solbakk identifies himself as both Sámi and Norwegian. For him, being a Sámi is a natural part of life having come from a home that was always clear about its origins.

But the situation is very different for Johansen, who learned only at adult life that her family is Sámi.

“Nobody ever told me that we are Sámi, not until my grandfather said that we are. He is 75 years old, so it’s a long time to live without saying anything. It was a really big step for him”, Johansen says.

The complicated and difficult history of assimilating Sámis into the majority population in the 1970s left many elderly people silent about their past and thus even more young people unaware of their origins. But according to Johansen, change is on its way.

“A lot of young Sámis are finding their way back to their roots and they are doing this in the big cities. Just like me, they are discovering their Sámi traditions because we don’t want to lose it”, she explains.

Researcher Berg-Nordlie says that, due to urbanisation, Nordic cities have an increasingly important role for Sámi culture, language and identity – but their capabilities and willingness to fulfil these responsibilities vary.

Some cities have a positive climate, with politicians and administrators being up to date on Sámi matters, while other cities are characterised by elements of hostility and administrative structures ill-prepared for Sámi issues, according to the researcher.

“I think it is also really important for people to understand that our people live in four different countries. We are one population who has been affected by the world around us”, Johansen says.

“Having borders between us affects us as well because they break the feeling of fellowship. All of this is of course usually forgotten once Sámis from different countries get together. It always feels like coming back home”, Rahko says.

Facts on Sámis in the Nordic countries

Janne Puumalainen, Anni Savolainen and Hanna Tuulonen produced this article for a seminar with the Nordic Press Association.