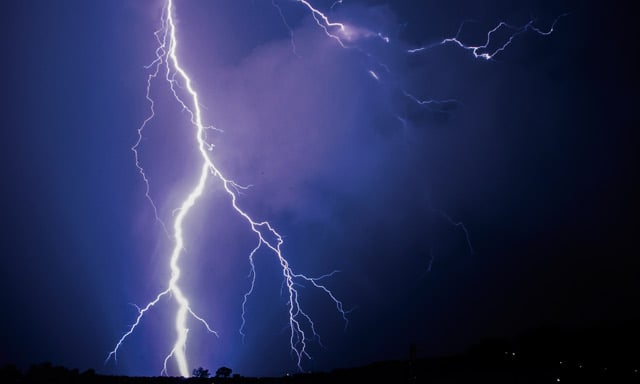 Photo: photomarcza/Depositphotos
“There was a lightning strike that hit a boat that was docked and then hit a man,” marina spokesman Morten Gjeruldsen told Budstikka.
According to a witness report, the man fell off the boat when he was hit. He was transported by ambulance to Ullevål Hospital in Oslo. A hospital spokesperson told TV2 that the man suffered only light injuries.
The lightning strike incident occurred while the southern part of Norway was experiencing unstable weather conditions.
“Heavy thunderstorms are expected in Rogaland and Hordaland, so beware! Otherwise, there will be rainy weather all across southern Norway on Wednesday,” Storm Geo meteorologist Beata Tveita said.
On the western coast, police in Stavanger received 30 reports of flooding within three hours on Tuesday night, with emergency services responding to 20 of the calls.
One hard hit location was Restaurant Mexico, where water poured into the locale while guests were still dining.
“We had to evacuate all of the guests sitting outside and those who didn’t get inside in time just put their legs up on their chairs,” waiter Egor Densyanov told Stavanger Aftenblad.
Some customers had to climb over tables just to get out of the flooded restaurant.