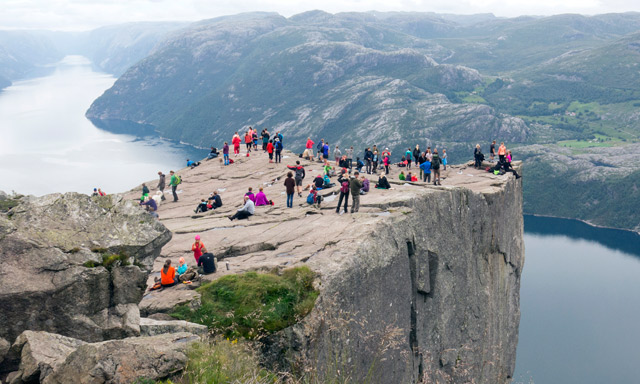 Preikestolen is one of Norway's most-visited attractions but geologists are concerned about a half-metre wide gap in the cliff formation. Photo: aul Kleiven / NTB scanpix
Stavanger Aftenblad reported on Wednesday that the Geological Survey of Norway (Norges geologiske undersøkelse – NGU) will increase its monitoring of a half-meter wide gap in the famous tourist attraction that has been cause for concern since 1930.
Geologists had already installed bolts on both sides of the crack, which is several metres deep, to measure any extension.
In May of this year, measurements indicated that the gap had widened by 2-3 millimetres, the first recorded change in 22 years.
NGU will now apply more modern methods to closely studying the Preikestolen gap. Among other things, the famous cliff formation will be scanned from different angles and researchers will fly over the cliff in a helicopter in order to obtain high-resolution photos.
Furthermore, a scholar at the Norwegian University of Science and Technology (NTNU) will make 3D models of the surface in order to make a stability analysis.
Marina Böhme, a researcher at NGU, said that measurements of the crack have been done before, but have proven to be inaccurate.
“We assume that Preikestolen has not moved lately. Nevertheless, something should be installed to detect any movements. We also plan to go up and check the crack from time to time,” Böhme told Stavanger Aftenblad.
“If we find that there is a danger of collapse, it will be appropriate to install permanent measuring equipment,” she added.
In addition to Preikestolen, which is one of Norway’s most-visited tourist attractions, geologists will also closely monitor an additional 32 mountains in Rogaland. NGU carried out a study by helicopter in Rogaland last year in order to identify all potential mountain problems in the area.
“Since then we have gone out to those locations that appear the most dangerous and where the consequences would be the greatest in order to investigate them closer,” Böhme said. “We are particularly concerned with mountains that are over the fjord and where tidal waves could be formed [by a collapse].”