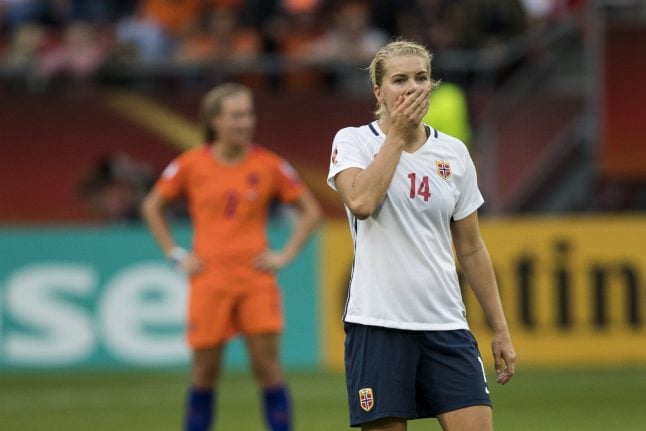 The winger capitalised on a superb cross from Lieke Martens from the left wing that found her face to face with helpless Norway keeper Ingrid Hjelmseth.

Pleasing the sold-out Galgenwaard stadium in Utrecht, the Dutch were on the front foot throughout the game, with Martens and striker Anna Miedema a constant threat.

Martens was denied twice by Hjelmseth early into the game as the keeper first cleared her shot in the first minute following a cross from van de Sanden, then tipped another over the bar ten minutes later.

Miedema, who turned only 21 on Saturday, sent two shots wide after halftime, then another five minutes from the end.

“There was team work, there was fighting spirit, and we also wanted to play good football,” said Dutch coach Sarina Wiegman.

“Today all those ingredients were there. That's something to be proud of.”

Norway, the runners-up at the last Euro in 2013, had a good chance in the second minute when Kristine Minde chipped the ball over Dutch keeper Sari van Veenendaal but failed to find the goal.

Van Veenendaal then stopped Caroline Graham's effort and that was just about all Norway had to offer.

Their attempt to put the hosts under pressure in the final minutes failed — in a rare scoring chance, Olympique Lyon striker Ada Hederberg missed the ball at the post in stoppage time.

“We had major problems in our attacking game and we ended up very disorganised in defence because of that,” he said.

Hederberg told broadcaster NRK that her team had not done enough to put the Dutch players under pressure.

“We gave them far too much space. There was an unbelievable distance between the players. That made us unable to help each other. We need to go up several levels in the next game,” she said.

Norway meet Belgium on Thursday in a match the Scandinavian team now must take a result from to maintain a realistic chance of progress in the tournament.

Belgium were beaten 1-0 by Denmark in the other Group A match Sunday.

The results leave Denmark and the Netherlands joint top of Group A on three points each.

The two best teams from each of the tournament's four groups qualify for the quarter finals.