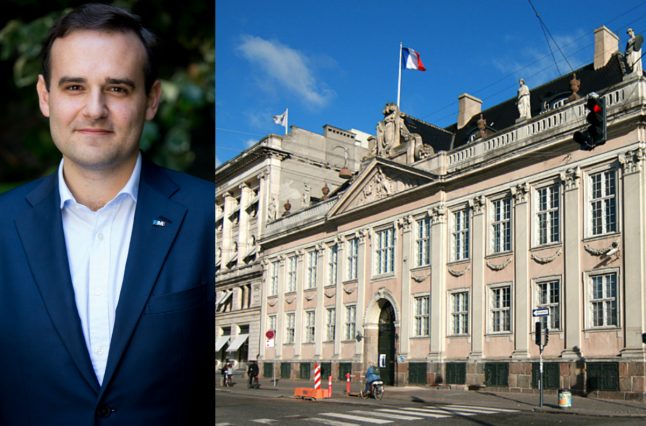 Looking inside the chic café a two-minute bicycle ride from the grandeur of Copenhagen’s Christiansborg parliament, it seemed on first glance as though the En Marche candidate for the French parliament’s North Europe constituency hadn’t yet arrived.

But Alexandre Holroyd and his team – a group of four dynamic-looking twentysomethings wearing blue En Marche badges – were easy enough to find, sitting outside at pavement tables like any self-respecting French team would do, tucking into Danish salmon and prawn salads while preparing for a meeting with members of Copenhagen’s French community.

Holroyd, 30, a French-British dual national who worked in public policy in London and Brussels prior to joining the En Marche movement in the summer of 2016, told The Local that he experienced Brexit as a trigger that led him to join the now-President Emmanuel Macron’s newly-founded political party, initially as a volunteer before eventually being nominated as a parliamentary candidate.

“I thought if we have a surprise like this in France, I would never forgive myself for just sitting on the sidelines… I felt the result emotionally,” says the parliamentary candidate, who describes himself as “profoundly pro-European”.

On the third day of a Scandinavian visit that has already taken in Oslo and Stockholm, Holroyd is keen to underline the importance of mobilising French voters in the UK, Ireland and the Nordic countries, which form one of 11 overseas constituencies introduced to the French parliament in 2010, creating an unusual form of parliamentary representation for overseas citizens.

Holroyd’s task is not made easier by voting days for the overseas constituencies not coinciding with those in France – the first round for overseas voters is on the 4th of June, while the first round of parliamentary elections in France will take place a week later, on the 11th.

“It’s essential for us that people realise [the difference in election dates]. We’re not taking anything for granted because we realise that people might not show up in the numbers that we’re expecting, so the onus is on us, the key thing is to get people out, and it’s really important because the truth is that this is not really a separate election.

“If we fail to give a majority to the president then the choice that the French made on May 7th, because of the way the constitution works, the powers of the president are incredibly curtailed. The country has very little choice. If it wants the reforms they’ve chosen then we have to win a majority,” says Holroyd.

READ ALSO: Who's who: All you need to know about Macron's 'balanced' French government

Will the runoff be between you and the incumbent [the Socialist Party’s Christophe Premat]?

“I think it’s impossible to know. This is only the second time we’ve had MPs elected abroad, and last time there was digital voting that has now been cancelled. There’s really no precedent. What we know is that the turnout now is very low abroad and that can create a surprise. But the French voting abroad and in this constituency in particular voted massively for the project of Emmanuel Macron.”

Why should expats have an En Marche MP?

“There are a couple of answers. It’s not about me but about giving a majority to the president, firstly. Secondly, I think what’s essential is that the French living in the UK and to a smaller extent Ireland have an MP which in the context of Brexit understands Brussels and London perfectly well. The third is this need to renew our political class.”

At this point Holroyd breaks off into a conversation with an elderly passer-by who comes over to greet him in French, congratulating him on Macron’s presidential victory before telling him she has come for the meeting after our interview. She then turns to go into the café.

“À bientôt,” Holroyd says to the woman, before returning to his prawn salad and our interview.

“Listen, I think the political class has more or less consistently put party interests in front of country interests.

“I’m not saying everyone, because we have some great politicians and some great people, I don’t like this sort of anti-elitist, ‘everybody should be thrown out of the window’. But there are a lot of political leaders who have swayed very significantly between ideological frameworks, which means trust is shattered.” As the candidate for North Europe, what are you offering French expats in that constituency?

“I have a view of what an MP should be, which is probably inspired by the Anglo-Saxon and the Scandinavian countries which would make me much closer to my constituents, and I think that’s slightly different than the way it’s perceived in other parties. So I want to be, if I’m elected, an MP which constantly goes back to see his constituents and that would mean travelling quite a lot.

“I also think that this constituency is very special in that a lot of the inspiration for the programme comes from this constituency, a lot of it from the Scandinavian countries, a lot from Denmark. The whole point about having flexi-security within the labour force, more liberalisation of the labour force but done with more protection for those who fall between the cracks, and a very big investment in education and training.”

What will you fight for specifically?

“The priorities will be French schooling abroad, it’s imperative that we keep the incredible network that we have for French schooling abroad which is exceptional. And the administrative services – we’re going to invest in digitalising all the administrative services in France, about five billion euros over the five years. We’ll fight for those funds to be redistributed to those who need it the most, the French abroad and the French in rural areas.”

“I’ve been inspired. I was in Oslo a couple of days ago, Stockholm yesterday and Copenhagen today. The simplicity and the digitalisation of all the procedures for things like passport renewal is absolutely inspiring.”

Does being inspired by the Scandinavian model not mean higher taxes?

“No. It means a reattribution of certain taxes. There are about €20 billion of tax cuts that we’re going to implement in the programme. The spending in the budget will be 50 billion euros on investment – 15 on renewable energy, 15 on training which are the two main areas of spending.

“We’ll save 60 billion – which will be a repetitive saving, unlike the 50 billion spend – on a number of areas where the system which is in place, for instance unemployment benefits for the higher bracket, there are big savings that you can make on those elements. At the moment the French regime for unemployment for high earners is very generous. We want to cap the top end of that. But there’s a whole host of areas where we’re going to save or shift taxation.”

So it’s inspired by Scandinavian social welfare but done in a different way?

“It’s similar and it will stay that way but to save money the higher end is going to be lowered. The system in itself, if you want, is not going to change, the caps are going to change.

“We’re going to increase the CSG [a levy which contributes to the financing of social security in France, ed.] by 1.7 percent, use that to finance the net salary of low income earners and decrease social contributions by employers to stimulate employment.”

How do you think the president’s first weeks have gone?

“The sense I get from everyone, including myself, is that we’re beaming with pride to have this president. And having gone around now here and in Oslo, we’re welcome everywhere. I’m not exaggerating, there’s a real hope for Europe, and that’s a feeling we haven’t had for a long time in France.”

“He’s an enormous source of pride and of hope. And it’s a hope that we desperately needed, and you can see the impact, even if there’s nothing legislative that’s been done yet. I think the momentum is itself bringing about change, before the actual legislative work starts, and that’s pretty spectacular.”

PARTNER CONTENT
Moving to France – how to zap the culture shock
Url copied to clipboard!