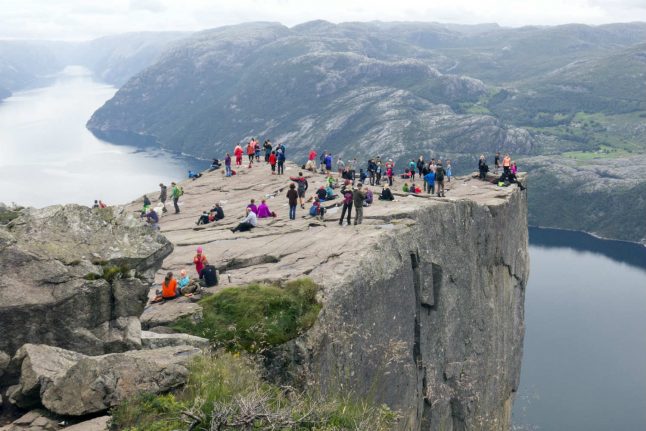 Although the famous cliff formation in the Lysefjord can be seen from the village, it is 30 kilometres away from the path that leads to the photo opportunity-perfect summit.

“We have sent hundreds of tourists away in no uncertainty that they’re on the wrong side of the fjord. In the summer season up to 10-15 cars show up each day,” Helge Fossmark told newspaper Stavanger Aftenblad, adding that there can be queues of minibuses lining up outside the village on summer days.

The country road leading to the village is described as “terrible” by Stavanger Aftenblad.

Another village resident, Gunnar Bøe, said that he is also visited by confused tourists.

“When we are in the cabin, sometimes two, three, four or five tourists come in. Every day. They say they are going to Preikestolen and understand nothing. Google Maps leads them over the Lysefjord bridge and into Fossmork. The road here is quite narrow and they sometimes get quite upset when we tell them to go back.

“They borrow a set of binoculars and can see all the people up on Preikestolen. It’s quite funny. We get to speak with Chinese and Japanese people, and there was an American that wanted to buy a cabin. He thought the place was fantastic,” Bøe told the newspaper.

READ ALSO: Scenes for next Star Wars film could be filmed in Norway

Roy Jarle Johansen of the Norwegian Public Roads Administration said that he would look into the issue, reports newspaper Aftenposten.

“I think we should make sure people are shown the right direction, when it is such a well-visited place. Roadsigns do not always solve the problem. Some people trust Google more,” Johansen said.

Google said that it appreciates feedback that enables it to improve its service.

“We are constantly working to improve Google Maps, and encourage people to report any problems they find, so that we can make sure we resolve the issue as soon as possible,” Helle Skjervold of Google Norway told Aftenposten via email.